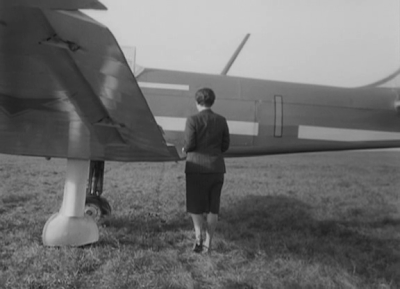 Soviet director Larisa Shepitko had only completed four feature films when her life was tragically cut short at the age of forty after a fatal car crash, one that also claimed the lives of four people on her film crew. The first movie to bring her international attention was 1966's Wings, an impressive and deeply considerate elegiac tone poem to nostalgia and the sense of isolation that so often accompanies it . The film follows Nadezhda Petrukhina (famed Russian character actress Maya Bulgakova), a former fighter pilot and wartime hero, as she goes through the motions of her current mundane existence as a school headmistress. Nadezhda comes across as a confident, proud woman, and the character carries these qualities through much of the film's first half, as she marches through the dour day-to-day routines that make up her life, which includes breaking up fights between school children, babysitting her neighbor's kids, and supervising the remodeling of the school house. Nadezhda's personal life is equally drab, and comprised mainly of two significant relationships; one with her boyfriend, a nice but otherwise tepid director of a local museum (which houses an exhibit on Nadezhda herself), and one with her only daughter, a grown and independent minded woman who feels a massive disconnect with her mother, and can barely bother to introduce her to the man she's just married. The pacing of this fist half is measured and the camera observant, and in only a couple of fleeting moments - involving fantasy-laden shots of cloud filled skies - do we get a sense of the angst and restlessness that may lie beneath Nadezhda's sturdy, firm demeanor.

As the film progresses, the layers of Nadezhda's life begin to peel away, and here we get some true insight into the character. We find out that her daughter isn't even her real daughter, and while the circumstances that led up to Nadezhda becoming her mother remain unclear, what is clear is that this is a secret she has kept in terror for a long time, gravely afraid of losing one of the truly important relationships in her life. As Nadezhda slowly becomes more and more drawn into her daydreams of returning to the skies, a narrative begins to form out of these bits and pieces, and we soon realize that the daydreams aren't even really daydreams, that Nadezhda is in fact remembering back on one of the great tragedies in her life - the death of a lover during the war - and so these flashbacks thus become less about Nadezhda escaping her life through fantasy, and more about how she can't even do that without being haunted by her past. The realization that the character is trapped within this poignantly vicious cycle - the drabness of reality feeding haunted memories and vice versa - exponentially adds to the ever-increasing sense of Nadezhda's alienation, something that had only been hinted at up to now. The character continues to display signs of mounting existential anxiety and isolation, and this is often enforced by Shepitko's brilliant compositions which, while they range from tight, cramped interiors to expansive, glorious shots of the skies and airfields and beaches, are all rendered equally bleak by the sheer alien presence of the former fighter pilot, oblivious to her surroundings, a wandering, lost soul with no destination.

Perhaps the most successful aspect of Wings is how Nadezhda is not merely depicted as an existential quandary on two legs, but rather as a feeling human being, capable of complex thoughts and emotions. Bulgakova, with her hard, weary face, delivers an exceptional performance, giving Nadezhda, along with her complexity, a certain grace and dignity, even in her gloomiest moments. The character is firm, but kind; sad but not bitter; and manages to hold her chin up throughout it all. She is even capable of still feeling joy, as shown in the film's most wonderful scene, when Nadezhda wanders into a lonely diner, and soon strikes up a deep conversation with the owner, a woman around her age. Nadezhda bemoans the fact that she's just walking through life, from one place to the next, with no pleasures at all. The owner talks with much vigor and enthusiasm towards life, contemplating how fast time seems to pass and recalling her school days as though they were just last week, a concept that works in stark contrast to Nadezhda's flashbacks that could have been (and in a way, are) from another life entirely. The two women sit, eat and drink, and eventually play a song on the radio and dance with each other, carelessly and with much laughter, as these two polar opposite perspectives on life briefly unite and mingle for one transient celebration of the moment.

The severity of Nadezhda's crisis eventually leads her to her former army airfield, where old buddies greet their war hero with open arms. Thinking that she's experiencing merely a bout of good old nostalgia, the men push her around the field while she sits behind the cockpit of a landed plane, allowing her to feel the wind on her face and possibly get a taste of her former glory. But Nadezhda has something else entirely in mind. For a character that kept her head in the clouds - both figuratively and literally - for much of her life, was there really any other way for it to end? And yet I'd be lying if I said I still didn't wind up with a huge lump in my throat when the inevitable occurs. While the themes that make up Wings - isolation, alienation, responsibility and the reconciliation of one's past with the present - are far from original, rarely if ever are they handled with the level of tenderness and compassion, and indeed effectiveness, captured here by Shepitko. Wings remains a remarkably bold and mature work of great wisdom and vision, directed by a young master who was taken away far too soon, yet still managed to leave an indelible mark on the world of cinema. 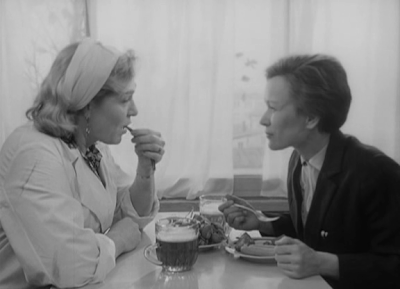 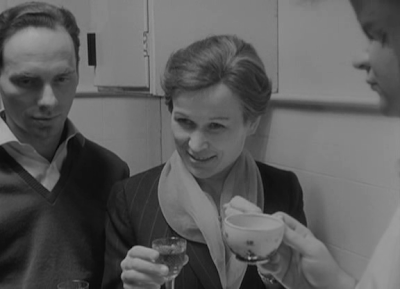 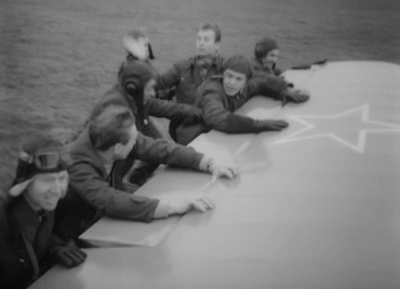 Posted by Drew McIntosh at 8:00 AM

"The first movie to bring her international attention was 1966's Wings, an impressive and deeply considerate elegiac tone poem to nostalgia and the sense of isolation that so often accompanies it.."

Aye Drew, I quite agree, and similarly I lament the early passing of this exceedingly talented Russian director, who a decade later would helm her absolutely masterpiece, THE ASCENT, which is one of the great works of world cinema from any period, and one which exemplifies the maturation of her style and thematic richess. I know at the time, the Russian government frowned on films that openly criticized family members, and then there was the matter of Shepitko lampooning war heroes. Your magnificent review here is an ever-insightful examination of sdme pertinent underpinnings including that of alienation.

Shepitko's husband of course is Elem Klimov, a celebrated director in his own right, who crafted one of the greatest anti-war films of all-time, COME AND SEE (1985).

I can't wait Drew, to learn of your reaction to THE ASCENT, which is a cathartic experience.

Thanks for the wonderful comment and kind words Sam, it's always a pleasure to hear from you.

I have heard nothing but marvelous things about The Ascent, and of course it comprises the other half of the excellent Shepitko Eclipse set, so it's one that I will certainly be watching at some point, and even if I don't end up doing a write-up on it, I will be sure to drop you a line and let you know my feelings. Your high praise has got me all the more excited for it.

Thanks to you too Drew, and I must say I can't wait for your reaction to THE ASCENT.