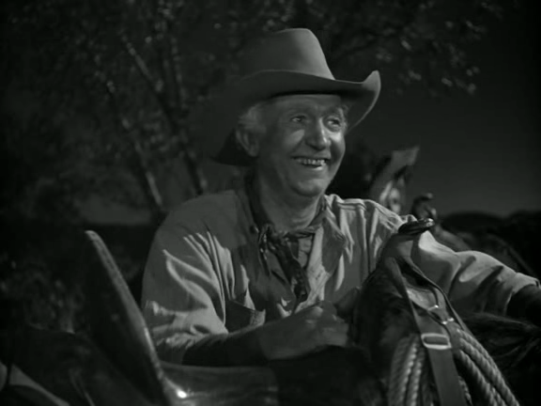 No one ever told me about this Walter Brennan. The one in Along the Great Divide. Is that why the movie shocked me so much? For a spell, at least, his is one of the most wicked constructs in any western I've ever seen. To be sure, there are characters in the genre's history who've committed grander atrocities than singing a song, but I'd be hard pressed to recall a dynamic as intimately discomfiting as the one between Brennan and Kirk Douglas here, one in which a psychic wound is located and assaulted with such relentless and gleeful surgical precision.

To clarify: Douglas is the marshall who is transporting Brennan's horse thief to face a murder charge properly in a courtroom, evading the father of the murdered man and his lynch mob who assume Brennan's guilt and seek his neck. Brennan, who sees this escort as merely (cruelly?) prolonging the same fate the mob intends to mete out, whiles away the hours with song, and stumbles onto the tune ("Down in the Valley"; more lovely = more menacing) which Douglas's father, killed years ago in a preventable lynching, used to sing to his son. Brennan hones in on the distress the song creates in Douglas and, against warnings, sings it loud and repeatedly, taunting the haunted lawman with invoked and mocked paternal parallels.

Towards what end? Presumably, Brennan aims to be set free in lieu of the madness he might provoke. (As played, a bullet in the head seems the more likely natural outcome). But Walsh and Brennan conspire to point at something more sinister: that this man is positively relishing in the torture he is inflicting, secretly thanking the stars that they have aligned to put him in such a position. The basic survival strategy of Brennan's character here is, as far as Hollywood logic extends, plausible - in an impossible situation, a person pounces on any scrap that may translate to power - but it does not account for the almost pathological grins of satisfaction and gut cackles of pure pleasure that inflect Brennan's performance. These interactions are so stinging, so stark in their single-minded pursuit of emotional damage, that they threaten to overwhelm practically every other development of drama and character in the film. That Brennan ultimately winds up some Frankenstein monster of victim, devilish antagonist, fool, ally, ghost, patsy, and benefactor of faith is just one source of the film's mystery. And when Walsh's sadistic streak (which doesn't begin and end with Brennan; Ray Teal's repeated delighting in the desperation and violent infighting of his prisoners is just as unaccountable) seems ready to tip over into the wearying, we get the remarkably tender scene of Douglas riding horseback with a dying John Agar, singing the forbidden song to comfort his friend as the life leaks out of his body while shots of Brennan, a tired and wholly impassive witness, are tossed out like a dare. The movie turns on such sequences where configurations, both mythic and immediate, of child/parent/death become fluid and interchangeable, with the residual guilt and grace momentarily assuming total command of the narrative. The dexterity with which the film bridges not just pure viciousness and utter humility, but such credible versions of each, is astonishing. 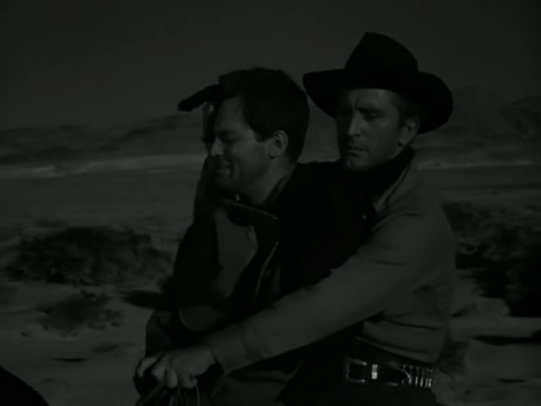 Posted by Drew McIntosh at 10:35 PM No comments: