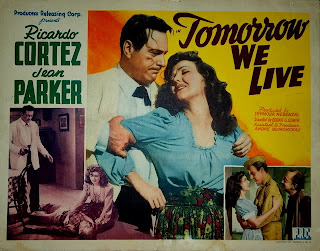 Tomorrow We Live was the first film legendary B Movie auteur Edgar G. Ulmer directed for the Poverty Row studio Producers Releasing Corporation, the same studio under which Ulmer would go on to make more notable films such as Detour, Bluebeard and Strange Illusion. This strange story centers on a young college dropout named Julie (Jean Parker) who lives with her father Pop (Emmett Lynn), a temperamental sadsack who operates a lonesome gas station in the middle of the desert. Pop is also in cahoots with a local gangster (Ricardo Cortez), who simply goes by the name "The Ghost", due to his having survived multiple attempts on his life that have left him walking around with bullets lodged in both his brain and his heart, injuries which could kill him at any time. The Ghost makes a play for the lonely Jean, and she soon finds herself intrigued by the mysterious criminal. But the abrupt arrival of Jean's boyfriend Bob - who had hastily departed for the war years earlier - leads to a tumultuous love triangle as the pair battle it out for Jean's love amidst the bleak desert terrain.

Tomorrow We Live is not one of the stronger of the handful of Ulmer's that I've seen, but even with that, there is a lot to like here. Particularly in the looser, more free-floating first half, where Ulmer successfully negotiates the picture's meager budget with his sharp sense of aesthetics to produce a number of striking and distinguished moments, often forsaking exposition for mood and atmosphere. Because of this, the exact relationship between a number of the primary characters remains a bit hazy for a portion of the film, but it never bothered me a bit, as one feels that clarity and cohesion aren't particularly high on Ulmer's list of priorities with this particular project. Instead, the first half is ripe with Ulmer's German Expressionism influences and background. In one early scene, Julie has a conversation with what appears to be her father's housekeeper, who pleads with the girl to keep her distance from The Ghost. Throughout the scene, the Julie character is standing while the housekeeper is sitting, and in the back against the wall Julie's shadow looms ominously over the worker's own, acting as a visual manifestation of the hierarchical underpinnings in the scene, and also recalling an iconic sequence from Nicholas Ray's classic Bigger Than Life.

Ulmer also has a lot of fun in the film's most striking set, the office of The Ghost, which is located in the back of the desert nightclub he owns (appropriately called 'The Dunes'), and features a bizarre plaid design for the wallpaper, as well as a variety of stylized lamps, odd shaped mirrors and heavy, hanging curtains. The office is often full of people, mostly smoking (a stark contrast to the film's other main location, the quiet, sparsely inhabited gas station), which creates a constant fog of smoke in the room and allows Ulmer to play with all kinds of visual tricks involving lighting and silhouettes. This office set, which acts as a haven for a majority of the significant action, recalls the gothic mansion in The Black Cat, with its sleek and vaguely sinister appearance, full of oddball touches. Another interesting aspect of Tomorrow We Live is how Ulmer occasionally tows the line between the natural and supernatural. While the movie is by all appearances steeped in the real world, there are a few hints that something more mysterious is afoot. The way The Ghost's girlfriend is hinted at as being psychic could just be a meaningless, throwaway detail, but then why include it at all? And the death of one of the major characters is teased at as being caused by some sort of ghostly revenge. Even the primary setting of the film, in the middle of a desolate and mysterious desert, provides an additional layer of surreality and gives the majority of the action an almost otherwordly aura.

Unfortunately once the film's second half starts, some of its charms dissipate, as the action comes fast and furious and the narrative hits full throttle. The story beats come at a breakneck pace, and there are all kinds of revelations involving blackmail and murder, and things get really crazy once a rival gang of The Ghost's enters the mix, making things even more complicated for that character. The whole last half still manages to be entertaining in a strange, bewildering way, but the screenplay keeps introducing new characters, and basically turns into a giant clusterfuck of lunacy, murder and hokey dialogue ("You look like you've seen a ghost!" "I have!"). It almost comes across like Ulmer made the decision to concentrate the majority of action to the second half of the film, in order to give himself more artistic freedom in the first, something which could certainly account for the severe change in pacing. The highlight of this latter part of the film has got to be the delightfully over-the-top performance from Ricardo Cortez, as The Ghost quickly descends from his calm, cool and collected villain status into a babbling and utterly incoherent maniac who starts murdering as though it were a kids game. Tomorrow We Live can be a disjointed and rather uneven affair at times, but it contains moments of signature visual bravura and style, and is an unusual and worthy entry in the oeuvre of a notable and highly interesting director. 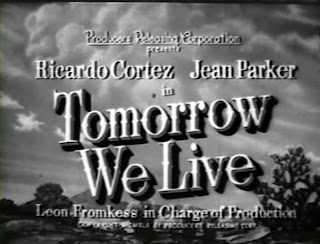 Posted by Drew McIntosh at 7:05 AM

Hey Nice! I'm glad you mentioned the wall-paper in Cortez's office. How did you see this? Online? Alpha? I need a better copy. I wrote about this film a few years back, though didn't cover the same shots or ideas! This movie needs a whole book written about it!.

Your writing is awesome. here's my piece:

The Tao of Poverty Row

Thanks for the kind words Erich, and thanks for linking your piece! I couldn't agree with you more that the blurry streaks and garbled sound and that whole dirty aesthetic are crucial when experiencing films like this. They are certainly still very much present in the copy I watched (which I grabbed off Karagarga btw), which appears to be significantly better quality than the one you posted screencaps of in your piece.

I also love how you bring up the bleached white effect very much present in some of the scenes. Particularly in some shots towards the end, where the high contrast white is so harsh and jarring that it almost gives the appearance of these characters walking out in sunlight for the very first time, like they are vampires or something. One close-up shot of Jean Parker in particular is super reminiscent of key shots of Delphine Seyrig poised in that blinding white from Last Year at Marienbad.

The one thing I would disagree with you on is that Tomorrow We Live's use of actors and sets is superior to those in Detour, where I personally consider Ulmer to be at the height of his power (though as I've said, I've only seen a handful of his stuff so far). But we are definitely on the same page with everything else, especially with the general awesomeness of Cortez's batshit crazy performance. And how about that wallpaper! Awesome stuff.

I will see it, then. Lovely review.

Thanks Simon. Would love to hear your thoughts if you ever get around to this one.