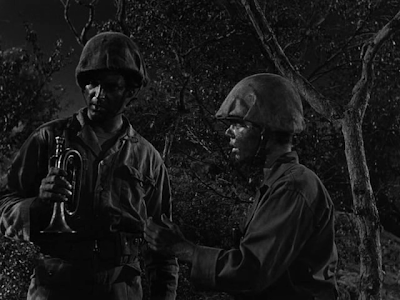 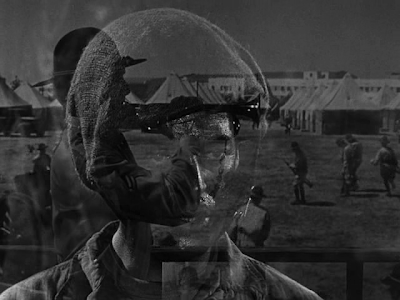 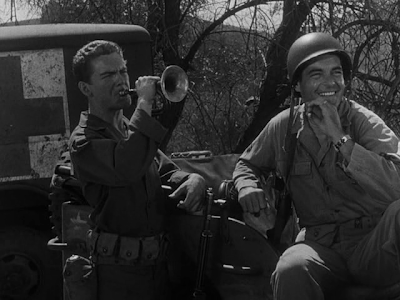 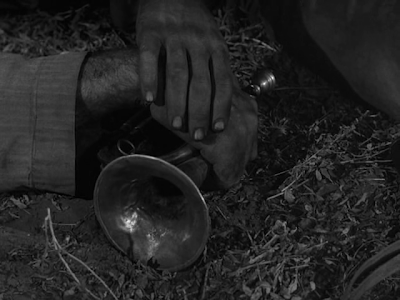 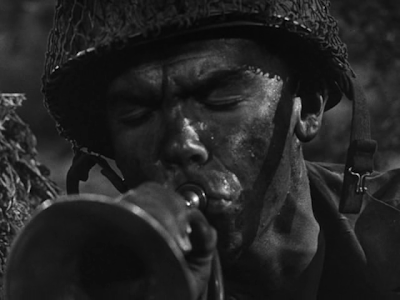 The images above are from Frank Borzage's lovely contribution (one of three he would make) to the "Screen Directors Playhouse" series, entitled Day Is Done (1955). As so often in Borzage, we are presented with a simple love story, played out over a hazy, perilous social backdrop. The backdrop in this case being the Korean War, and the love story being, atypically, not of the romantic male-female variety with which Borzage is so commonly associated, but rather the love of music that is shared by and binds together two male soldiers: a distant, dispirited sergeant (Rory Calhoun) and a green, eager-eyed private (Bobby Driscoll). The pair, each a musician before entering the war, find a bugle on the body of a slain Korean soldier while out on reconnaissance patrol one night, and as they each take turns with the instrument, eyes become glazed over, piercing time and flooding them with memories from what might as well have been a previous life, memories that literally melt onto the screen as the sergeant fondly recalls the crisp pride with which the job of the bugler was once carried out, and it becomes clear that the music produced from the bugle is providing for these men an intimate refuge no less than that of the apartment in Seventh Heaven or the hovel in Man's Castle.

It would make sense to assume that the restrictions of the half hour television format would do no favors to a director who by this point was considered (barring Moonrise) long past his prime, but this is very much a deeply felt piece of Borzage, with his spare, compressed mise-en-scene, his commitment to foregrounding human drama at the expense of supplemental space translating pretty much untouched, as does, more surprisingly given the length, the air of unhurried leisure with which moments and events are normally allowed to play out in his worlds. Though in this world, alas, the reality of the situation does not ultimately give itself over to the transcendent; here a death is a death is a death, with grief finding expression only through a weary, impromptu performance of "Taps", both an act of solemn farewell and the solidification of another memory.
Posted by Drew McIntosh at 12:55 AM 4 comments: 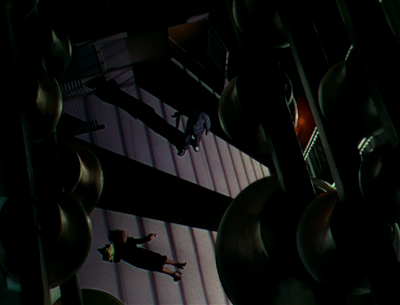 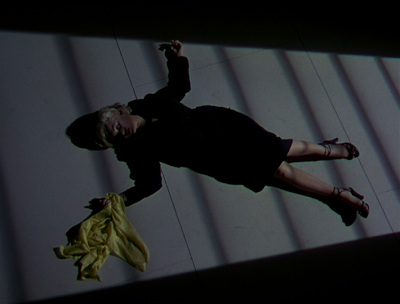 There's something poignant about a movie that sees fit to acknowledge the death of its own aesthetic. Such is the case with Niagara, the frothy 1953 Technicolor noir not so much directed as assembled by Henry Hathaway. Assembled, literally, around an icon in the form of Marilyn-just-as-she-was-becoming-Marilyn; assembled in the sense that the chief stylistic preoccupations on display -- hot, lurid colors in movement and ever-furtive window slat shadows; a simultaneous rebuke and embrace of genre -- are barely allowed to exist without her presence. She is very much the engine for these elements, the sole expressive nexus that swirls them together, giving the film so much of its visual personality. And even if Marilyn wasn't much of an actress at this point, she still slinks around the dusky crevices of this world in her bright pinks and yellows (even shifting into pure shadow at times) with every bit the force and presence of the natural wonder that provides the backdrop, while the likes of the great Joseph Cotton and Jean Peters struggle to do a damn thing with their lots, and it's very difficult to say that the movie does not belong completely to her.


And so after the sheer ludicrousness of the script has guided Monroe's character to the top of a bell tower*, and after she's been murdered by her husband in said location, we are given the relatively loaded compositions shown at the top of this post: the aesthetic spirit of our film, now lifeless, bathed in the features that constantly surrounded her, except now given a decidedly mournful appearance. Giant slat shadows within a splayed container of light that may as well be an exaggerated coffin. An outfit one might wear to a funeral. Color in the form of a bright yellow kerchief, which Monroe had absurdly held onto and flailed throughout her final doomed chase. The kind of kerchief that one could clutch in their hand as they wave goodbye to a loved one. And that's what this moment is, a movie waving goodbye to itself. Sure, there's another act left to go, with Cotton and Peters perilously trapped aboard a gasless boat drifting towards the edge of the raging falls, but the movie's style as it had been established --- having already been given a proper farewell -- all but evaporates, giving way to dingy brownish earth tones and misty, bland blues and a general blah atmosphere of predetermined redemption. This stretch may have more "action" and "closure" than anything that preceded it, but it feels at best like a forced and prolonged coda, and at worst like something stripped from some other, far less interesting film. We have already been given the real climax, and it's easy to sense that the movie agrees.

*The matter of the bell tower, along with a handful of other shared cues, has led some to ponder the possibilities of Hitchcock drawing upon Niagara for inspiration while conceiving Vertigo. I don't see much there personally, but who knows. It is more than a tad interesting to think of Hitch's masterpiece and its boundless obsession as being, in some subconscious measure, a reaction to Niagara and the frank treatment given to the murder of its blonde femme fatale, its sober formal acknowledgement of the loss and of what it means.
Posted by Drew McIntosh at 4:50 AM 4 comments: