Here is one of the most refreshing and compelling directorial debut's to come along in quite awhile. Antonio Campos was only 24 when he directed (from his own screenplay) Afterschool, the prep school drama that has drawn him comparisons to heavyweights such as Gus Van Sant, Stanley Kubrick and Michelangelo Antonioni, among others. Told mainly in carefully composed static shots, often with the action contained to the periphery, Afterschool gives us the story of Rob (Ezra Miller), a distanced, affectless tenth grade student at Brighton, an upper crust New England private school, who spends his spare time watching viral videos online and putting up with his cocaine addict/dealer roommate (and likely best friend) Dave. At Brighton, an extra-curricular course is required of the students, and instead of going the popular sports route, the meek and introverted Rob decides to join the video club. One day, while shooting some footage in an empty hallway for class, Rob inadvertently captures the drug overdose and subsequent death of the Talbert sisters, twins from a well-to-do family. Instead of calling for help, Rob leaves the camera in place, walks over to the sisters, and cradles one in his arms as she takes her final breath. No points for guessing that - Surprise!- Rob now finds himself the center of the latest online viral video.

Afterschool is fascinating for myriad reasons, but the central point of dramatic interest seems to be Rob himself. The main question being, why is he so frighteningly unaffected by everything? Is he merely the latest casualty of the YouTube generation, desensitized and alienated from his surroundings, conditioned only to respond to moments of "purity", moments that capture something "real"? One of the best sequences in the film plays off this notion, as Rob sits down with the school principal to view a tribute video he's been asked to create for the deceased twins. However, instead of the sappy over-sentimentalized piece expected of him, Rob creates a patchwork of "real" moments as he sees them, moments of people expressing pity, disgust, or even complete indifference towards the twins. An interview with a friend of the girls shows that he didn't even really know them, and was distanced by a kind of awestruck worship. Moments, in other words, that you would never regularly see in a video of this kind. At another point in the film, Rob, armed with his video camera, grabs his girlfriend by the throat, emulating a violent porno he watched earlier, and we get the impression that his obsession with online videos can no longer simply be contained to his consciousness.

It's only with a final, fleeting moment of shock and realization that we truly see what Afterschool is going for, and it's a startling, haunting sentiment that Campos has no reservations expressing. This is a film to watch and absorb, not only for its deeply engrossing story and sleek, distinct visual style, but also because of what it has to say in regard to the age of gluttonous, unprecedentedly accessible media we live in, and the effect it could have on an already solipsistic-prone demographic. If Afterschool is any indication, Campos is a major talent, and I certainly look forward to seeing what he will provide us with next. 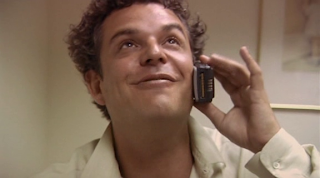 Bernard Rose's 2002 feature ivansxtc. (based on Tolstoy's The Death of Ivan Ilyich) begins with the funeral of Ivan Beckman (Danny Huston), talent agent extraordinaire. We see the news of his passing from cancer ripple through the agency he worked for, and while everyone was clueless as to Ivan's medical condition, no one seems surprised nor particularly phased by his death. His clients are informed, and they too can muster only the slightest of mournful responses before it's back to business. And as everyone scrambles to pick up the pieces, we wait with baited breath (or growing impatience in my case) for the inevitable flashback showing us what kind of human could have left behind so much success, have met such a sad end and still inspired this much curious indifference.

We soon get our answer. Ivan, as they say, lived in the fastlane. As his story begins, he is on the verge of signing one of the biggest actors in the country, the obnoxious Don West (Peter Weller). After Ivan successfully closes the deal, he and West hit the town for a night out, and we get our first glimpse of many into the wild life he led, which includes every hard-partying cliche in the book (even the renowned line of cocaine snorted off an attractive blonde's genital area). At work the next morning, he is greeted with a standing ovation from his entire office, and a Variety headline celebrating his acquisition. And just as it seems that life can't get any better, as so often happens in the movies, life throws him a curveball. His doctor wants him to come into the office immediately. A chest x-ray taken at a recent appointment shows an ominous spot in his lungs, and all signs point to cancer, which is soon confirmed with the massive amounts of blood Ivan begins coughing up in the mornings.

And now here is where the film finally takes off and becomes compelling. First off, Danny Huston is absolutely brilliant. As Ivan, he exudes a real charm and likability behind the slick Hollywood veneer, but also a profound sadness that becomes readily apparent as we soon realize that for all the clout and attention Ivan receives, he doesn't have a single genuine relationship in his life, and no one to confide in. As the graveness of his condition becomes impossible to ignore, Ivan makes the decision to plunge headfirst into excess of every kind, as he watches his last days fly by in a chemically induced haze. Here is a man who had the world by the balls his entire adult life, and who now, presented with a situation entirely out of his grasp, crumbles with disturbing ease. The toughest scene to watch involves a pair of hookers Ivan hires, and what begins as a drug fueled orgy quickly turns into a session of soul baring for Ivan, who finally breaks down in front of these two girls, who can only stare at this lonely, withering soul helplessly, and offer hollow sentiments while they attempt to get the fuck out of there as fast as they can. The next morning, Ivan is rushed to the hospital and will never return home.

The film has a distinctly verite style, which works mostly in its favor. Ivan is utterly fascinating and heartbreaking to watch, and the documentary-like feel of his scenes have a raw, honest urgency to them. Huston is so good that it creates an entire other problem for the film; the rest of the acting is almost across the board awful, and the scenes without him are simply painful to endure. All of Ivan's associates and clients are played as petulant, reprehensible caricatures, and I found myself rolling my eyes at their over top behavior and exaggerated performances numerous times. Luckily these people remain on the periphery of the story for the most part, but still, we get it, Hollywood is filled with self-serving, opportunistic sleazebags, let's move on please. My advice would be to skip the pointless first twenty minutes, the funeral segment and all of that. It's boring, drags on way too long, and will even make you mad at its inclusion when you reflect on the fact that you were unnecessarily denied Huston's magnificent performance for nearly a quarter of the films running time.

It should also be worth noting that, in addition to the Tolstoy novel, ivansxtc. was based off the life of Hollywood agent Jay Moloney who, like Ivan, seemingly had it all. He represented some of the biggest stars in the world and dated some of the most beautiful women, before his cocaine addiction cost him his job and eventually led him to take his own life. It is worth keeping this in mind, as Huston undoubtedly drew upon the addiction-driven desperation and loneliness that surely played a hand in reducing Moloney's promisng life to merely another Hollywood cautionary tale. ivansxtc. is certainly rough around the edges, very rough in some instances, but has some profound things to say about mortality, addiction and loneliness, and is anchored by one of the best performances of the 00's. 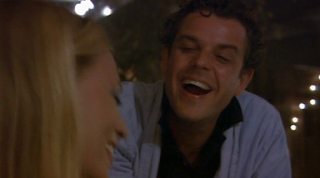 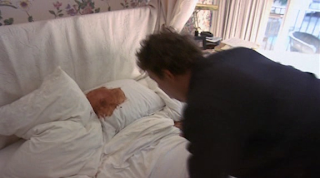 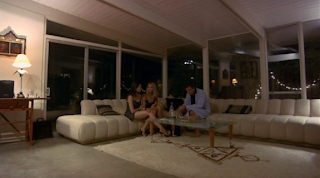 Posted by Drew McIntosh at 3:04 AM No comments: