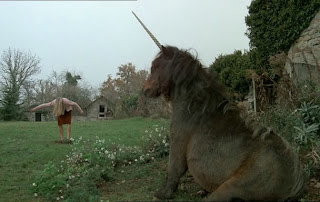 Black Moon is a chimerical, hallucinatory concoction from French director Louis Malle. Malle's work includes, among many other notable films, the ultimate conversation movie My Dinner With Andre, which I cite for a very specific reason. Andre is one of the quaintest, most economically sound movies you will ever come across; a feature length display of good old fashioned conversation between two friends enjoying a fine dinner, each others company and the simple pleasures of the spoken word. Now, if you will, traverse the cinematic panorama to its other side. On this side of the landscape, oblique paths twist in on one another. Plots hover in the air and trail off, shapeless objects dripping acid. Phantoms abound, and it always seems to be cloudy. You are now in the land of Black Moon. Meet Louis Malle, cinematic trekker. His versatility is not to be denied.
In only the very loosest sense of the word is a "plot" present in Black Moon. It involves a young woman named Lily (Cathryn Harrison), who is on the run in a world where a literal war between the sexes is taking place. Overcast skies fill the screen as Lily stumbles upon a group of women in army drags beating a male prisoner around and laughing. Male soldiers gun down defenseless women in the streets, their army tank looming in the middle of the road like an over sized reaper. Lily flees from both scenes with equal fervor, and soon finds herself in a strange forest where she sees a few odd things, among them an overweight unicorn and a herd of naked children chasing around a massive pig. She follows these harbingers to a lonesome house, and from here the strangeness gets turned up quite a few notches. In this house dwells a loony old lady in a bed (Therese Giehse), babbling incoherency and trying to communicate on an old radio. Odd animals of all shapes and sizes and linguistic talents roam around the manor, as do a silent young man and woman (Joe Dallesandro and Alexandra Stewart) also named Lily (yes both of them). The couple appear to care for both the old lady - a disturbing breastfeeding is included - as well as the children, and their erratic behavior is alternately compulsive and calculated as they communicate with Lily in the barest, most abstract of ways as she tries to figure out the puzzle that is this mysterious situation she's found herself in.

There are indications throughout the movie that all of this is taking place in the head of Lily. The highly coincidental names of the silent strangers aside, there are a few instances where Lily is engaged in an activity with the strange animals and children, only to have the camera cut to a point of view showing her all alone, her behavior suddenly taking on a psychotic tint. Indeed, the inclination while watching Black Moon is to approach it in the same vein as something like Mulholland Drive or Repulsion, as an abstract and/or allegorical treatise of a disturbed woman slowly losing her mind. However the movie ultimately comes across as such a hodgepodge of symbols and ideas (it invokes- among other things - Alice In Wonderland, Tristan & Isolde, Garden of Eden mythos, medieval imagery, Alchemical symbolism etc.) that it feels ultimately futile to attach any significance or psychological underpinnings to the images presented. This borderline freeform melange is certainly interesting and occasionally fascinating, but it's madness never quite gels into a whole as interesting as its parts.

In many ways, Black Moon also plays out as something of a grab bag of elements from other surrealist masterpieces that Malle has clearly drawn from. The wordless opening 15 minutes, with its stark open roads, background war noises and images of quiet, left behind fires simmer with an apocalyptic quality that is clearly an homage to Godard's Weekend; the cast of random animals sauntering in and around the house with more moxie than its occupants recalls Bunuel's The Exterminating Angel; and the extraordinary house, a character itself, with its strange, ghoulish inhabitants and untold secrets feels like a relative of the house so important to the mystery at the center of the great Rivette film Celine & Julie Go Boating. That one of the names given a writing credit on the film is Joyce Bunuel should come as no great shock.

Malle is clearly indulging himself with Black Moon. He is having fun throwing this assortment onto the screen while simultaneously paying respect to those whose own creations inspired it, and what the movie lacks in resonance and coherency it makes up for with a charming, unabashed exhibition of imagination and appreciation. It also feels like an extremely personal film from Malle, the exorcism of a distinct creative impulse bred from the verve of the Nouvelle Vague movement and a thirsty, exploratory movie mind. It didn't surprise me at all to learn that the house and property used in the movie belonged to Malle himself. It'd be tough if you didn't know better to peg Black Moon as the director's work, but sure enough, there he is in every frame. 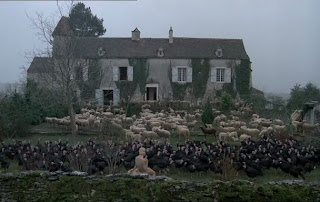 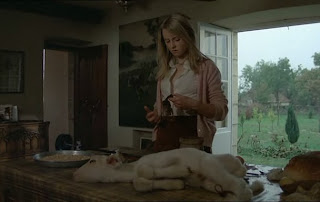 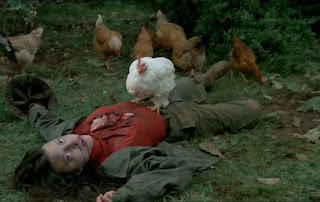 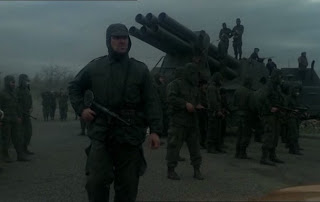