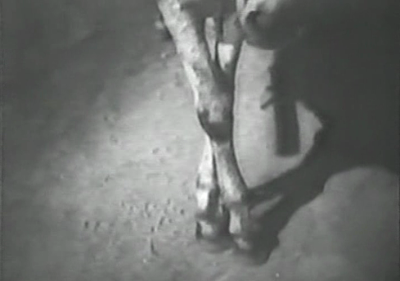 Tucked into the crevices of Raoul Walsh's most prodigious decade, Salty O'Rourke doesn't boast the crackling pace or deft mood shifts that characterize so much of the great director's work from the period, and while it will likely never be talked about in the same breath as a White Heat or They Drive by Night - which is probably fair enough - it still stands perfectly well on its own as a coherent piece of personal expression, with a set-up as pure Walsh as anything you'll find: Alan Ladd as the title character, a passive, cunning gambling man whose past has caught up with him in the form of a deep debt to Bruce Cabot's gangster (Cabot, as amiable as ever and all the more malevolent for it), and who naturally comes up with a quick and supremely over-the-top plan to raise the needed scratch: buy an untamable horse on the cheap, hire an ostracized, uncontrollable jockey, and win the biggest handicap of the year.

Walsh was of course an avid horse owner/bettor throughout his life, and it's no surprise that he would request a loan out from Warner Bros. in order to do this modest project for Paramount, a chance to harmonize two of his greatest passions. Appropriately it's one of the more intimate Walsh films I've seen to date, leaving behind much of the capacious visual experimentation he was engaging with at the time in favor of a somewhat more pointed and inhibited form, comprised often of closed spaces and medium shots observing folks entangled in all sorts of duping and wooing, and in that respect it winds up coming out closer to something like The Strawberry Blonde than, say, the more superficially similar High Sierra. The deep focus and open spaces here are reserved for the glory of the horse track, where the bustling, indifferent masses that so often pack the background of Walsh's frames - a compositional motif established as early as The Big Trail, and an integral part of his art from thereon - are for once united by the energy of a central spectacle.

There are certainly some issues abound. The screenplay, for one, is kind of a double-edged sword, loose in structure as much of the best Walsh is, but also rife with the kind of deathly trite dialogue that any actor would be hard pressed to do a damn thing with. And the nicest possible thing to be said for Ladd, whose stone mug here seems to evaporate on-screen time and again before he can barely get a word out, is that he's just no Bogart. All in all though, Salty O'Rourke is a pleasant treat for those willing to plumb the depths of 40s Walsh - relaxed, peppered with personal touches, and displaying instances where it feels like Walsh just couldn't be having any more fun, such as Stanley Clements (something of a poor man's Cagney, nevertheless equally epitomizing what Farber called Walsh's "little big shot") fluffing his pillow in frustration only to have it puff out dollar bills, or a woozy late-night montage which vigorously carves through assorted New Orleans hotspots, or what is easily the biggest hoot in the film, and probably the most honest moment as well: the introduction of the first racing horse, the shot opening on its enticingly crossed front legs, before a sexy pan up to fill out its figure. Not even a Lupino or Mayo ever received such an entrance.
Posted by Drew McIntosh at 12:50 AM No comments: