Melville must have swooned. Nearly as much as in This Gun for Hire or The Asphalt Jungle, one can sense a wellspring for the great French director in the first 15 minutes of Hubert Cornfield's Plunder Road. A nearly wordless, sartorially attentive and process oriented train heist taking place entirely in the rain and snipped at from a variety of viewpoints, this opening sequence (gobbling up roughly a quarter of the total running time) not only looks forward to the later abstract Melville's, but glances back a year as well; it's almost impossible to not be struck by protagonist Gene Raymond's Bob le Flambeur-like aura during his introduction: pensive, middle-aged, pale haired, a perfect gentleman with a "real hood's face". Actually, we can't ever know if Melville saw Road or not, but I'm not sure that it matters; this was 1957, and noir iconography at this point had already started to empty itself out and take a half step towards the kind of ghost imagery that Melville would shape to his own extreme and eccentric end. The spiritual union is there if nothing else.

Not that this opening is without its own eccentricity; indeed, part of its brilliance (and I would without any intended hyperbole deem it one of the great marvels of the 50s American B cinema) is the indefinable rhythm that it creates through a fundamental motional clash: fleet, exemplary action editing applied to images and movements of great physical weight. Cuts slam back and forth continuously between careful men, cumbersome machines and sensitive mechanisms; the object of the heist is a cache of gold bricks that can only be moved by crane and many guiding hands. And lording over all in this sequence is the rain, which sharpens the contrast in both directions: as a dynamic visual presence that adds an instant vivid force to the decoupage while simultaneously acting as yet another factor responsible for further weighing down of the bodies in frame.  Almost certainly a matter of budgetary restraint, the film's approach to depicting its rain actually doubles down on this central clash, very clearly using a rain machine at times, and clearly using some scratch or pencil technique committed directly to the emulsion at others. The difference between these two methods is the difference between a biting realism and a frenzied Brakhagian rush, or the difference between muddy bootstraps and the electric consciousness that carries them. 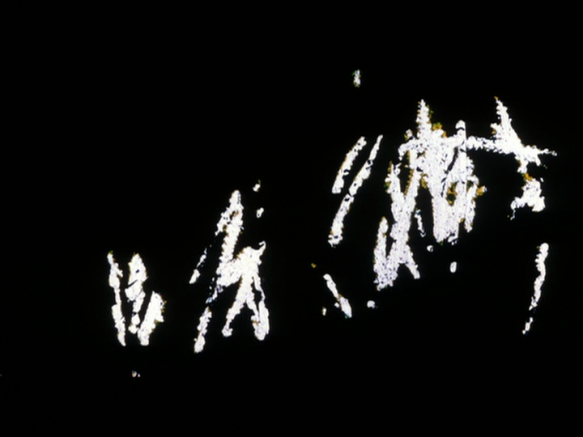 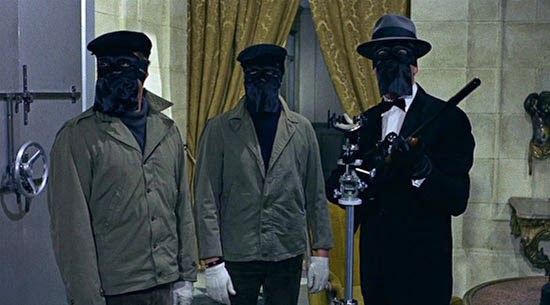 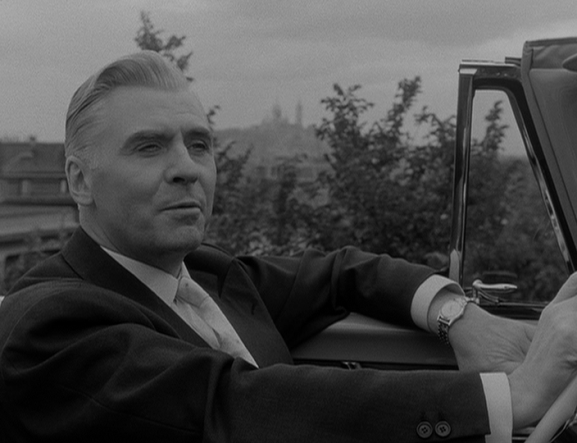 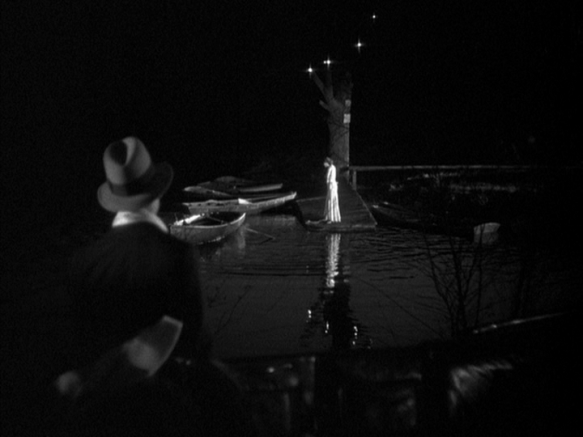 Early Capra can have a heckuva way with space. Take for instance the running gag in 1931's Platinum Blonde with Robert Williams' repeated sarcastic bows to Jean Harlow's butler from various points across the gulf of her mansion; it registers not only as a soft jab towards upper crust convention, but also, in its own way, as an eloquent bursting of the awkward bubble of physically distanced communication via wit. There's something similar at play one year earlier in Ladies of Leisure with Barbara Stanwyck's introduction: after popping a flat, Ralph Graves pulls over to the side of the road on a bridge over water; Stanwyck, in deep space and fancy dress, having just escaped the clutches of an apparently nefarious party yacht (the scenario which has led to her jumping overboard remains unspoken) rows a small boat towards a rickety dock and gets out. "Can I do anything for you?" he shouts from on high. "Yeah, you can look the other way!" she sasses back from the depth of the unbroken shot.

The water theme is played to the hilt during the course of Ladies; like a myth Stanwyck emerges from it in the beginning and attempts to give herself back to it at the end. In between there are too many tears to count, and one remarkable sequence - the most pivotal in the film, I'd say - set against rain that also happens to provide her with the all too rare opportunity to keep dry. A storm forces the hand of Graves' surly painter; having been resistant to Stanwyck's sly charms up to this point, he grudgingly offers her a spare bed to sleep in after a modelling session so that she doesn't have to brave the downpour. Fade to the middle of the night: a restless Stanwyck lies awake, and then Graves, in a concise succession of shots that have the expressive integrity and sharp economy of the barely-in-the-rearview silent cinema, wordlessly exits his room and walks over to place a blanket on the faux-sleeping Stanwyck, leaving her marvelled at this first display of affection.

In addition to any purely ambient function, the rain in this sequence provides a particularly potent erotic charge, the fixed tempo of its patter playing counterpoint to the barely suppressed emotions in play. But then Capra has an extra trick up his sleeve: as the sequence fades to black and both the rain and Stanwyck trail off, we are met at fade in with a very Preston Sturges-esque egg frying in the pan, bubbling and alive in all the ways Stanwyck's visage was, with the frying sound almost a precise rhyme with the rain. The effect is mildly startling and fairly complex, with a pressure-and-release quality that at once preserves the abstract energy built up previously, while also finding for it a very particular expression by couching it in a reciprocal act of domestic ritual - Stanwyck, with an ostentatiously devotional touch, is preparing breakfast for Graves. 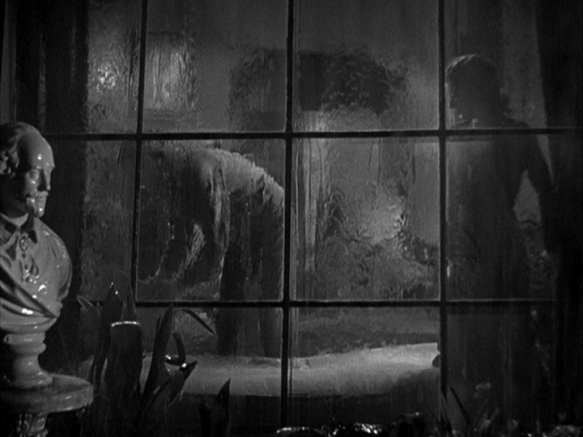 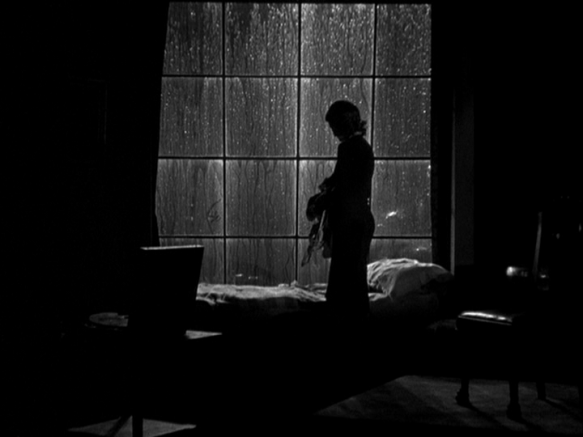 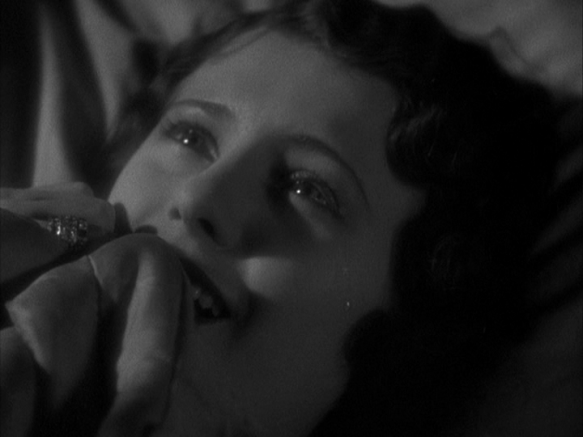 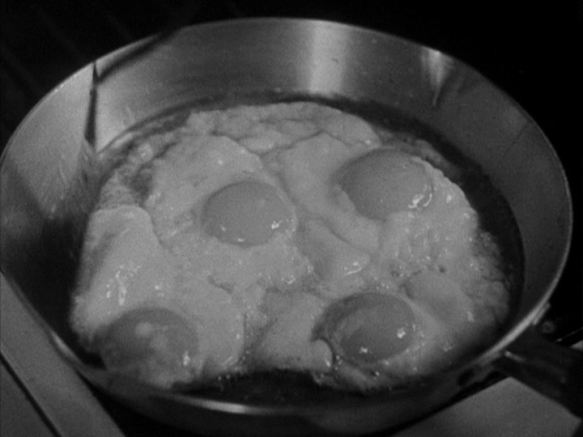