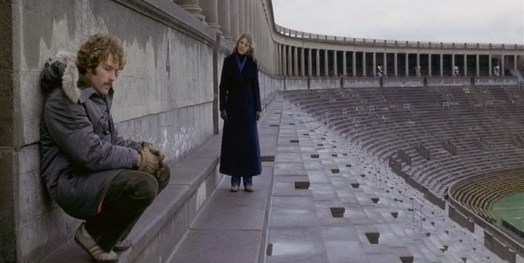 On the surface, James Bridges' The Paper Chase (1973) has much in common with the only other Bridges movie I've seen to date, Mike's Murder (1984), insofar as that both are constructed around essentially the same conceit: the obsession one person harbors towards a second who can never be known beyond the level of abstract image, and the accompanying path from naivete to disillusionment blazed by this obsession. The later movie is a great, haunting work (plot: Debra Winger attempts to uncover the truth behind the murder of a casual sexual acquaintance who was also secretly a drug dealer) - not a mystery as much as a personal quest for reconciliation, drifting on a wave of nervous, timid energy and unfolding as stretches of inertia punctuated by bolts of epiphany and high suspense. It's easily the greatest performance I've seen Winger give, and there is an admirable directness to Bridges' approach, an open acknowledgement of the great unknowability hanging over everything and the limits of the material in engaging with it, that gives that movie so much of its wallop. If The Paper Chase, easily the more critically and financially successful film of the two, fails to summon anything close to Mike's power, it's at least in part because its obsession - that of a first year Harvard law student (Timothy Bottoms) with his rigid professor (John Houseman) - is instead worked through with a stifling, distanced rigor; lengthy longshots and disembodied voices are a constant, and not two minutes seem to go by without the feeling of some great scramble to grab the artiest composition available. Unsentimental is a word that pops to mind, but A Film of Surfaces seems to be a little closer to the truth, and it's exactly this sense of remoteness that keeps the movie from ever gaining any significant, resonant traction. In Mike's Murder, unspoken feelings dominated the emotional atmosphere, even after they had indeed been spoken. In The Paper Chase, everyone tells everyone else how they feel and the sentiments seem to get swallowed up in all that pretty air. The best scenes (and they are excellent; at the very least Houseman's accolades were well deserved) are the ones that take place in the classroom, where the 2.35 frame and mannered compositional approach transform the space into something resembling a gladiatorial arena - academic pretensions become stripped away, leaving little more than a mass of bodies waging war in a series of petty, personal victories and defeats. 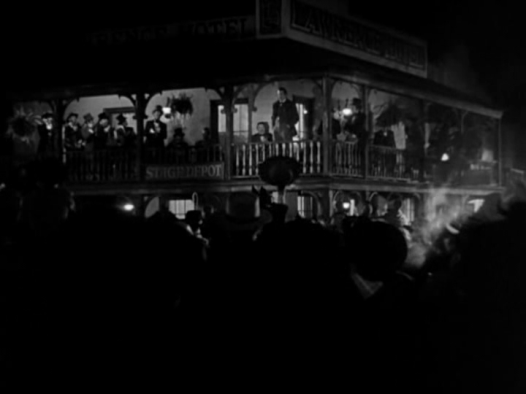 Also, two first time viewings from one of my favorite directors, Raoul Walsh: Dark Command (1940) carries something of a minor reputation these days, often granted faint praise but made to be carefully mentioned outside of and below the rest of Walsh's 40s work, and that seems about right to me. A big budget picture for Republic, it displays many of the impersonal, uneven qualities one associates with such a determinedly prestigious product - qualities roundly absent from most of Walsh's stunning work for Warner Bros. of the same period - and while it embeds itself deeply in historical facts that are played with fast and loose, there are still pleasures to be found. Though none of the actors turn in their finest hour, the reteaming of Wayne and Trevor only a year removed from Ford's Stagecoach is a lot of fun, if only to watch for the points of convergence and disparity that emerge between the two unique relationships. And though Dark Command is ultimately a lesser film than Pursued, it is actually the more successful experiment with marrying the western milieu with noir stylistics; not bound to cumbersome subtext like the style of the Mitchum film was to its Freudian threads, Command is able to cultivate its moody atmospherics more freely and subtly within Walsh's busy open spaces, evoking a palpable sense of accumulating collective dread.

More notable was Captain Horatio Hornblower R.N. (1951), which struck me immediately as one of the greatest Walsh films I've come across yet. The spectacle of adventure on the high sea and Walshian deep focus breaks down into a personal elegy for the dead and love(s) lost, morphs into an account of loyalty and good humor among professional men on the run: in other words Walsh doing Ford doing Hawks. The patchwork nature of the narrative comes from a screenplay fashioned from three C.S. Forester stories (think Ford's The Long Voyage Home or The Sun Shines Bright), an ideal platform for Walsh to display his flare for fluidly navigating various tones and emotional registers (maybe only LaCava was from the classical Hollywood period was as adept); in this respect Horatio can stand easily beside the likes of The Strawberry Blonde and Gentlemen Jim, but comes off as the more mature film, light on the nostalgia that pervades those great pictures and heavy on the introspection that began tempering Walsh's daring-do as his career entered its later period. Besides mentioning the breathtakingly mounted, almost impossibly intense action sequences, what should also be noted is the careful attention paid to color throughout. At least two moments pop off in the mind for the audacious way Walsh renders the dramatic tensions strictly in terms of color: an early scene with Peck's Hornblower and Alec Mango's rebel leader, where the latter's castle interior becomes bathed in a sinister purple aura as the depth of his mania becomes apparent; and a later scene between Hornblower and Virginia Mayo's aristocratic female passenger, a small culmination of the growing sexual tension between them that sees their outfits reflect the other in a reverse dominant color pattern.

I'm sure there are other depths to be explored here; it's a dense film in many ways and I can't wait to sit down with it again. Essential viewing. 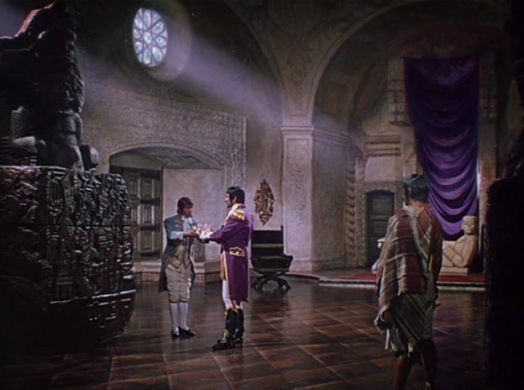 Posted by Drew McIntosh at 1:55 AM No comments:

The horror anthology can be a tricky, frustrating subgenre to navigate. The truly great ones are few and far between (and even those are largely more a matter of consistency rather than ingenuity), but the promise inherent in all the others of finding a gem in the rough (a common enough occurrence, in my experience at least) can lead to even the most discerning of horror fans wading through piles of shit in search of a segment smacking of real creativity and ideas, if not out of anything other than the same sense of exploratory pleasure/fervor that any genre adventurer is well acquainted with.

The wraparound is of course an essential ingredient in most worthy anthologies, simultaneously tasked as it is with standing outside of the individual stories and acting as its own mini-narrative, while also providing the context and connective tissue for the tales taking place and, in the best of cases (see: Creepshow, Dead of Night, any of Roy Ward Baker's work for Amicus) establishing the thematic and stylistic trends to be followed. It's not very common that these wraparound framing segments emerge from any given anthology as the highlight, but such is the case with The Theatre Bizarre, a 2011 anthology that I'd been looking forward to for some time given the names involved. It's unfortunately largely terrible, but the framing story, titled "Theatre Guignol" and directed by Jeremy Kasten, is a pretty striking accomplishment: a crazed young lady wanders into a desolate, baroque theatre and becomes the sole audience for a paper-mache Udo Kier, who stands on stage and waxes cryptically on the transformative potentials of fiction. It's a clear homage to the Club Silencio sequence from Mulholland Drive, and even directly apes some of Lynch's mise-en-scene, but is distinctly stylized in its own right (utilizing a mixture of both static shots and jagged handheld, for one) and is able to conjure up its own uneasy sense of mystery, if not quite the same well of deep oneiric emotion achieved in the Lynch. The progression of this framing story - Kier becomes more human as the female audience member takes on his theatre puppet characteristics - relies on the ellipses provided by the other separate stories, but taken as a whole this little film constitutes one of the better horror shorts to roll around in recent memory. 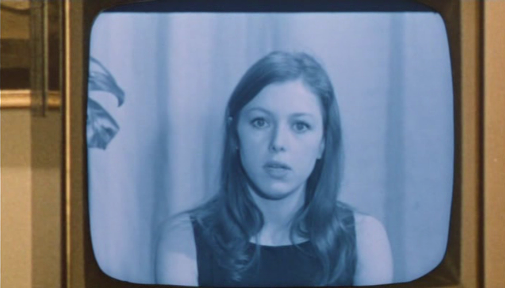 This Man Must Die (Claude Chabrol, 1969) is a perfect title, clearly and starkly expressing the vengeful mindset that engulfs its protagonist, with the same sense of forceful determination that drives its story ahead. As a dramatist, Chabrol tends towards a lot of open narrative space - his M.O. is generally to establish a milieu and then calmly observe the plots and dualities creep into being. Here however, the inciting incident - a small boy is fatally struck in a hit-and-run - occurs before the title card is even punched onto the screen. The father vows to find his child's murderer, and from there on exists not one sequence that doesn't either up the emotional stakes of the pursuit, or shove it along its course in an almost fatalistic compulsion; it's quite easily the most single-minded film from Chabrol that I've seen to date. One scene in particular suggests the determined tone: the father, leaving the house of the murderer deflated after having his revenge plan foiled, stops off at a restaurant to grab a bite, only to be met by a television with a news reporter who is calling him by name, entreating him to return to the location he's just left. The act of watching television is of course one of the great throughlines in Chabrol's oeuvre, a signifier of empty bourgeois leisure. In this film even the TVs won't let you forget; respite is simply not an option. 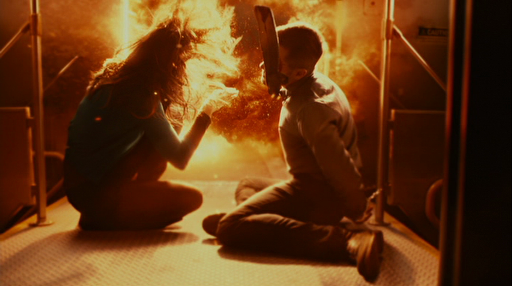 I also watched Source Code (Duncan Jones, 2011) again this weekend. I saw it in theaters when it originally came out and was impressed, but was surprised to see how well it holds up, and I would even venture to say that it's a significantly better film than my initial viewing suggested. It does everything right that the vastly inferior Moon fell well short of - beautifully paced, formally sharp and on-point, and never allows itself to get swallowed up by its silly ideas and obvious genre antecedents. Instead, rhythm, emotional beats and even bits of poetry are consistently foregrounded as the high concept cogs away in the background, rearing its head only to move us from point A to point B (or, given the film's structural reliance on repetition, point A to point A) but otherwise staying the hell off to the side. There's a real quality of gamesmanship evident in the way Jones doles out pieces of the bigger picture while holding others back, and while something resembling a tension/release pattern emerges from within this flow of information and the way it collides with the more immediate suspense of the happenings on the train, it never feels overly schematic in any way and is almost always carried out with a ruthless, lean efficiency. It's in this way that Source Code feels like something more from the school of Anthony Mann or Richard Fleischer than it does the crop of other Hollywood time travelers or beat-the-clockers released in the past decade.

I was also quite struck this time around by the ending, which played to me originally as something of a cop-out, an unnecessary extension towards conventionality after a darker, more resonant closing point had naturally presented itself minutes earlier. On further reflection though, there is something bold about the way the movie seems to press the parameters of the cliched happy ending, how it must move completely out of the movie we've been watching and jump into an alternate one in order to appropriate the veneer of optimism. It's tonally much more complex than I'd given it credit for, and I'm now not sure I'd change a thing about it. This is a great movie.
Posted by Drew McIntosh at 11:05 PM No comments: