The Eve of St. Mark 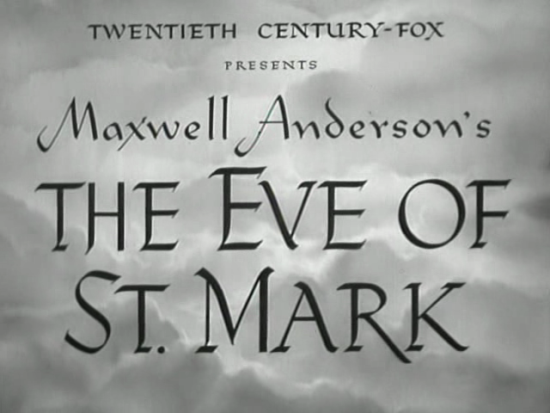 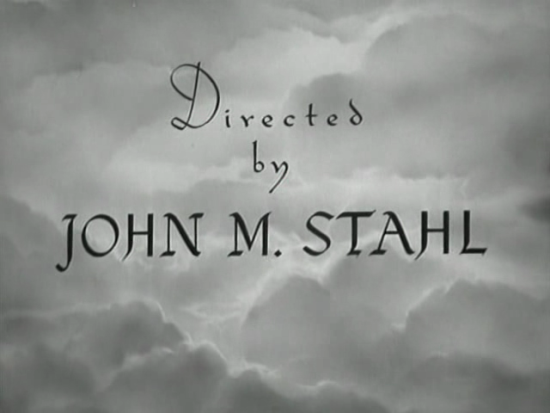 Andrew Sarris' sole, brief comment on Stahl's The Eve of St. Mark (1944) in "The American Cinema" can seem a little odd in the specificity of its claim: "...revealed a profound comprehension of the emotional implications of two-shots as opposed to cross-cutting." Don't many of Stahl's films exhibit this very quality? To my eyes, the director regularly defaults towards an unusually detached and observational mode with his framing, and the presence and repeated use of a gentle, backwards track in his work feels almost designed towards substantiating a vivid, enveloping and essential atmosphere void of privilege (like Raoul Walsh, Stahl is a director whose films consistently play as a world > its characters rather than the characters > their world). How else would one possibly describe the finale of When Tomorrow Comes (1939) if not as a supreme example of the "emotional implications of two-shots as opposed to cross-cutting"?

Watching the movie, it makes more sense why Sarris may have singled it out for this specific quality. Frequently in Stahl the melodrama arises from a secret or unspoken impediment in a romantic relationship (Gene Tierney's psychosis in Leaver Her to Heaven; the marriages of John Boles and Charles Boyer in, respectively, Back Street and When Tomorrow Comes; the deception of identity from Montey Woolley in Holy Matrimony), the drama being a natural outgrowth or endpoint of the way the data contained in this gulf is responded to; the distanced approach in these examples generally producing a bristling, private tension and a certain understatedness to the emotional charges (very powerful stuff, and a large reason why I value Stahl so much). The Eve of St. Mark reverses these terms; instead of an aberrant, intimate romantic relationship, it presents a homogeneous ensemble (of WWI soldiers), and instead of organic melodramatic development, its players are thrust into an extremity outside of their control (a losing battle in a dank cave of a malaria-ridden island somewhere in the Philippines); the result being here that the two-shots (or three or four; that is, the lack of cross-cutting during dialogue or drama intensive scenes, which is as predominant as ever) effectively act as the affirmation of a set of collective fears and anxieties which slowly begin to atomize as a climactic moral imperative comes into focus. The communal baseline in play here doesn't necessarily make the approach more potent, but it stands out, and is more concentrated and demonstrative than in any of the other Stahl I've watched.


All of that comes in the movie's latter half, which is pretty much as dark and dire and effective as it sounds, but the earlier sections are all pitched at a significantly lighter tone, reinforcing that Stahl and comedy are a pretty fascinating combination. The humor is never really subsumed into the solemnity, and vice versa; rather they exist alongside each other, are even placed in dialectical opposition by Stahl. A good example of this is the main character in Holy Matrimony, a world famous painter who fakes his own death to escape celebrity; the incorrigibility is played fairly broadly and often for chuckles by Woolley, but Stahl's camera retains a certain air of remove that underlines the pathos of the situation. The extended courtroom sequence which ends that film winds up hinging on the explicitly absurd importance of a pair of hairless collarbone moles, yet Stahl's courtroom looks like this and this. In Eve, the funniest sequence involves a few of the Army buddies sneaking out to meet a couple of girls at a pub. Their stumbling waiter ignores them, gets the order right anyway. Vincent Price woos a drunk girl eating a hamburger by locking eyes with her and reciting Shakespeare. But then a couple of the guys leave to pick up easier looking girls; Vincent Price tells his girls to go wait on him in a curtained booth then decides to leave, stopping by the booth to flash a smirk before abandoning, Stahl's camera lingering behind for a brief moment. It's kind of haunting, and is the first thing I thought of when I read that Maxwell Anderson, author of the original novel, hated the movie.

Posted by Drew McIntosh at 1:50 AM