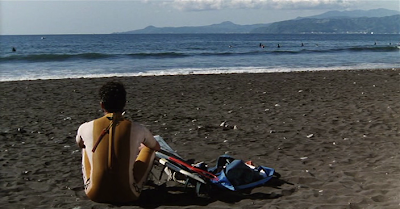 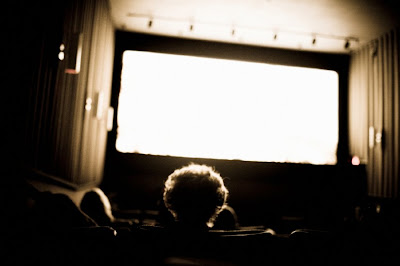 Shigeru is a deaf trashman, and the sea tells him a story. He finds a broken surfboard one day while on the job, repairs it with some spare styrofoam, and immediately walks to the water as though a man possessed. He attempts to surf, and is laughed at by the locals as the waves repeatedly toss him from his board. He returns day after day to practice, and eventually becomes a competent, if not good, surfer. But mostly he sits and watches. The watching is the important part, the meaningful part. One even gets the sense that, for Shigeru, the surfing is merely an attempt to physically reconcile the profound lure of the vast, mysterious ocean with his own life force. He is often accompanied by his girlfriend - who may or may not also be deaf - and together the pair sit on the beach, as though spectators in a theater, observing and contemplating the limitless blue screen before them that seems to encompass no less than everything in life worth feeling .

Takeshi Kitano's superb A Scene at the Sea is, on its surface, the story of a tender and delicate romance between two people whose relationship is completely devoid of all verbal communication. They relate to each other not so much through body and sign language, but rather through that innate sense of knowledge and anticipation shared between two people whose souls are fundamentally intertwined. It's also about a man who aims to break the doldrums of a stale existence through finding a passion in life and seizing it with every ounce of intensity he can summon. But above all it is a film about deep observance. Almost every character is shown at one point observing another from a distance, as though they were a viewer looking in on the detached reality that is another person's life. And everyone looks at the sea. 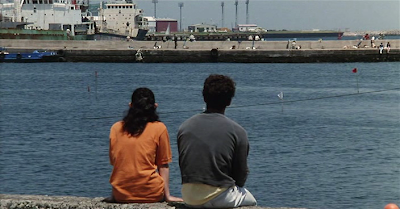 My mind keeps returning to Kitano's exquisite compositions, deliberately framing the couple and other characters staring at the sea as though they were viewers sitting in the front row of some kind of production. A Scene at the Sea thus contains many scenes involving surfing, but is itself not really about surfing. It is about how, to a degree, our observances shape us, and about how our intermingling with and manipulation of the elements (the image) can have the ability to lead us to a further appreciation of life. Shigeru is hypnotized by the aura of the sea, observes it, and is compelled to interact with it. Filmmakers observe life, and attempt to capture it. All of this is to feel something, to find some truth, to transcend, to synchronize, to do many different things. And in the greatest instances of success, they can have the ability to enrich our perspective and appreciation.

The ending of the film, in some abstract way, flirts with perfection. Shigeru's girlfriend stands at the edge of the ocean, with Shigeru's surfboard in hand, and tapes a picture of the two of them to the board before releasing it out into the water. The last shot we get is of the photograph, a captured memory of a specific time and place, stuck to the floating piece of foam, doomed to get lost in the expansive body of water that will endure countless lifetimes and continue to lure people in with its mysteries and sensual beauty. A Scene at the Sea is a wonderful film, probably my favorite within Kitano's disjointed but fascinating career. It's a deep, reflexive meditation on life and love, cinema and surfing, observance and incorporation, and filling the gaps in our life with wonder. 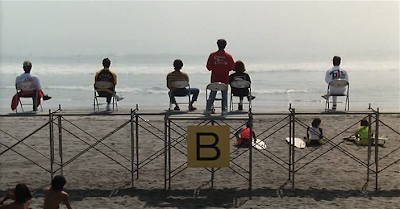 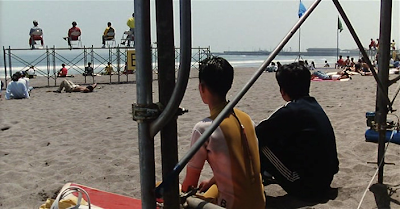 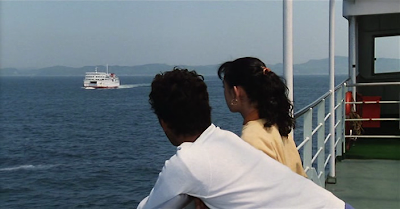 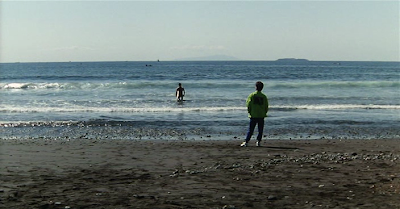 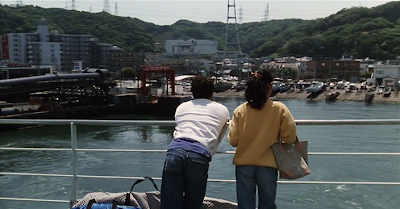 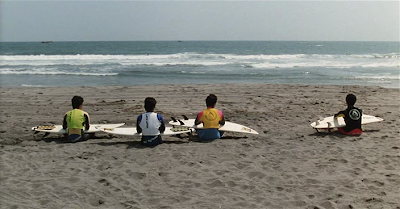 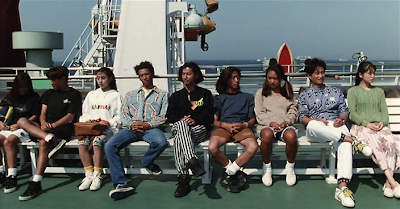 Posted by Drew McIntosh at 7:35 AM