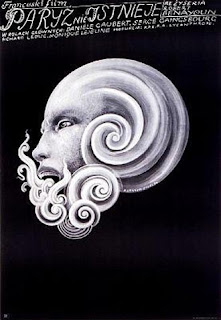 First of all, just take a look at the poster. That is a movie poster. If I'm walking around France in the late 60's and see that poster hanging in the wall of my favorite movie house, I'm seeing that movie. End of discussion. Alas, Paris n'existe pas, a wannabe-heady but ultimately hollow post-New Wave exercise in time travel and philosophic pontification, fails to live up to the unmitigated coolness of the poster and the potential of its premise. Said premise involves a young French painter named Simon (Richard Lecud), who one night smokes a joint at a party and quickly develops an array of supernatural abilities, among them the power to move objects at will and the power to receive premonitions of insignificant events a few moments before they happen. Simon lives in a cramped apartment flat with his girlfriend, and soon begins receiving visions of a previous tenant who lived in the apartment 30 years ago, a single, attractive lady. He develops something of a voyeuristic relationship with the image of the woman, who is frequently shown in the middle of intimate acts, such as getting ready for bed and bathing, and watches her with a quiet intensity and curiosity as she moves through his apartment like a phantom. As his mysterious visions and sensitivity to time continue to increase in both intensity and frequency, Simon soon finds himself wandering the streets of Paris, on the brink of losing his mind.

There is an enjoyable air of mystery in the first half hour or so of the movie, as we view Simon's rapid evolution into this Billy Pilgrim-esque character stuck out of time, and wonder what exactly has happened to him. Was the pot he smoked laced with some sort of psychedelic substance? No, his friend assures him. It was good stuff, but not that good. Much is made at the beginning of the movie on how Simon has been plagued by an annoying bout of painter's block for some time, and my first thought while watching was that director Robert Benayoun was possibly presenting a sort of abstract tale of an artist's bottled up creative drive manifesting itself in the every day world. But it unfortunately becomes pretty apparent by the midway point of Paris n'existe pas that Benayoun is using his premise merely as a means of waxing philosophic on the concept of time in decidedly uninteresting ways, such as in the many scenes that take place between Simon and his friend Laurent (Serge Gainsbourg, who also wrote the score) that involve the pair espousing trite, half-baked philosophic conceits back and forth on the future and the past and what separates the two. The last half of the film almost entirely revolves around Simon wandering the streets of Paris, catching little premonitions here and there but otherwise completely oblivious to his surroundings, and rapidly losing touch with himself. And that's pretty much it, nothing really happens other than, well, a lot of wandering. It grows thin pretty fast. The main problem seems to be that Simon is as much a mystery to the audience as his condition is to him, and we are simply given no reason at all to care about watching this man ramble around aimlessly. The film is flimsy intellectually, visually undistinguished (aside from the occasional use of stop motion and stock black-and-white footage to accentuate the time predicament), and without any deep sense of mystery, we are left with a rather tedious and trying experience passing itself off as something profound.

If I talk about what bothered me about the movie however, I have to also point out what I liked about it, and I did indeed enjoy aspects of Paris n'existe pas. Serge Gainsbourg composed a rich and haunting orchestral score for the film that works at infusing the accompanying images with a certain nostalgia and sense of foreboding, particularly in the sequences with Simon and the phantom lady in his apartment. That story, by the way, gets more play than I gave the impression of, as it does receive a good bit of focus in the middle part of the film. Those sequences are probably the best in the film, as they are the only ones where I got any kind of sense that Benayoun had a distinct vision with what he was doing here. One particular scene, involving Simon and his girlfriend making love in their bed with the phantom lady in the background listening to an old record player, is extremely striking stuff and anticipates the vibes of the masterful haunted house sequences that would come 5 years later in Rivette's Celine and Julie Go Boating, to such a degree in fact that I wouldn't be shocked to learn that Rivette had seen and been inspired by that particular moment.

Researching director Robert Benayoun online provided some limited but interesting information. It seems that Benyoun was a film critic who wrote for the French film publication Positif, and was also occasionally published in Cahiers du Cinema. He is probably best remembered for being one of the more rabid enthusiasts of comedian Jerry Lewis, having both written a book and filmed a documentary on the performer. He was a solid supporter of the Surrealist movement, and was supposedly anti-Godard, taking the opportunity to speak out against the man's work whenever given the opportunity. I find the last thing, about Godard, to be particularly interesting if true. Early on in Paris n'existe pas, the characters launch a verbal attack on the shallowness of modern art and the shocking lack of feel in it, a sentiment that seems to be shared by Benayoun, displayed through some choice editing and the incorporation of American cartoon strips in a less than positive light. It's interesting to think that this film could have been Benayoun's cinematic rebuttal against the films of the New Wave movement, possibly the modern art he found to be shallow and without feel (a quick perusal of Benayoun's top 10 lists from 1963-1968, found here, show only one instance of inclusion of a New Wave heavy hitter - Truffaut's Stolen Kisses (1968).) But while the films of the New Wave largely remain bold, invigorating works that are ripe with intellectual and emotional stimulation, Paris n'existe pas is for the most part unfocused, fruitless, and indeed, without feel. In a way it's a hollow shell of a film, one that's interesting to look at and to think about, until you realize that there's nothing really going on inside. But at least we will always have that kickass poster.
_____________________________________________________________
.
On a completely unrelated note, I decided to take advantage of the new Blogger Design feature, and give the site a new look. I was never really satisfied with the old template I chose, and feel that this new look both suits the blog and reflects me a little better. Please feel free to leave any feedback, positive or negative, on the new look. Thanks! 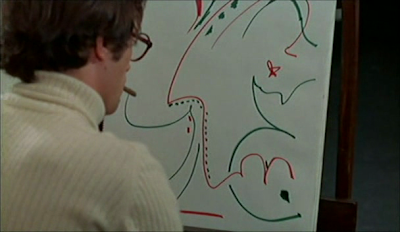 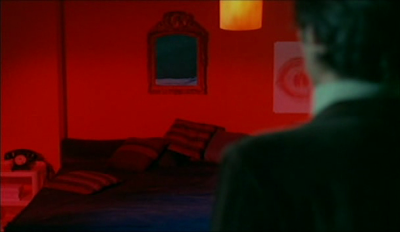 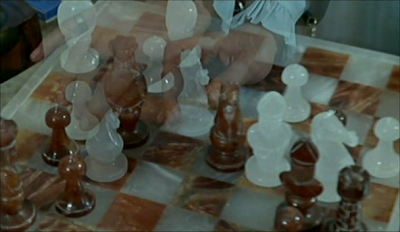 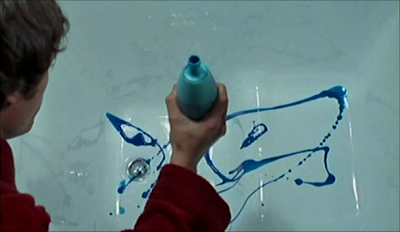 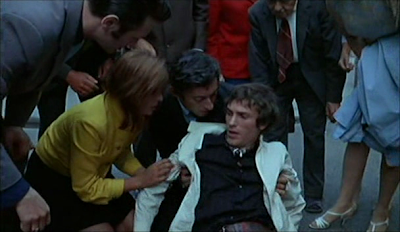 Posted by Drew McIntosh at 1:30 AM