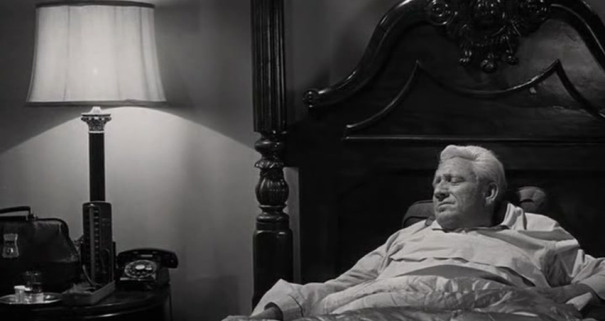 If death is always felt most strongly in Ford around the edges, then The Last Hurrah earns its reputation as something fundamentally and uncharacteristically disengaged in the late deathbed sequence where the director finds himself confronting mortality in the most overtly conventional of dramatic terms. So many of Ford's endings are one or another kind of final goodbye, endings that bloom with melancholic force because of everything that's left unsaid and the way that this shapes the emotional timbres of the moment(s), so the necessity here to have it all verbally expressed in pat phrasing (Tracy to his doc: "Let's stop kiddin', we both know the score") instills a certain parched effect upon the event, and the stuffy, studio-imposed editing of the unusually ascetic b&w compositions tips everything over into a somewhat stilted variant on the type of frigid rigor one tends to associate with a Dreyer (and is there any argument that this isn't the most Dreyer-esque of Ford?)

But the grace notes survive - watch how Tracy holds on just a fraction of a second too long to Edward Brophy's finger as Brophy is leaving his side for the final time - and the last shot is just one of the most beautiful things ever filmed, a mournful ascent of shadows suggesting that all of these dear, authentic men in Frank Skeffington's life/death themselves already have one foot out the door. If it's not quite as devastating as the final moments of The Sun Shines Bright (and really, what is?), it at least affirms the world of The Last Hurrah as the twilight zone of the former film dragged onerously into the present, with more dust and less to hold onto.