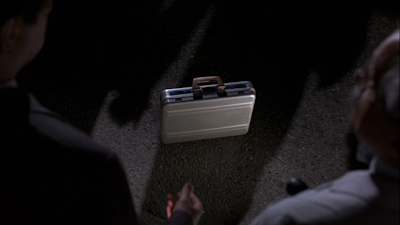 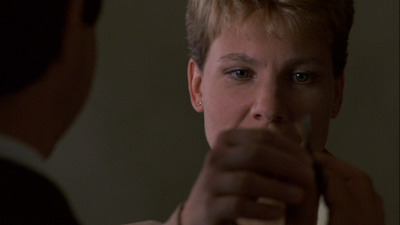 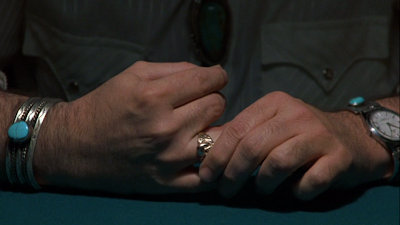 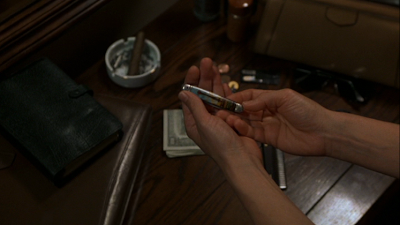 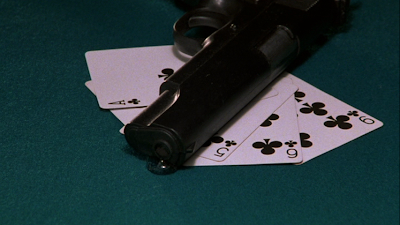 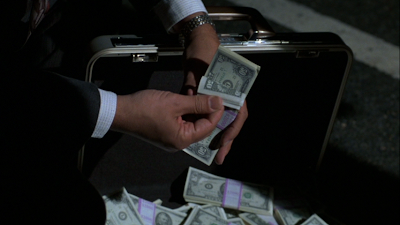 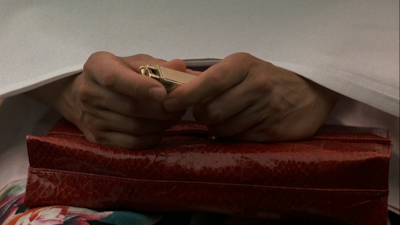 What makes David Mamet's best films - those being his con films, and namely House of Games and The Spanish Prisoner - so fascinating is the delicate balance he manages to maintain as a director between constructor and giddy spectator. Mamet has had a lifetime fascination with magic - or more appropriately, illusion (just see his casting of Ricky Jay in, well, pretty much everything he's ever done as evidence), and thus he views the world of cons less through a jaded, cynical lens than through that of a wide-eyed, intensely primal curiosity. Mamet's plots are surface-smooth, intricate clockwork constructs, and yet he is so much more interested in feeling out and exploring the nuances of these richly insulated facade worlds and the inhabitants created by illusion than he is in bare, cold mechanics. To Mamet, a good con is like a good magic trick, and just underneath the sting of deception lies a transient exhilaration. It wouldn't surprise me at all to learn that a great desire of Mamet's is to one day be taken for a giant ride.

Objects in particular take on an almost talismanic significance in Mamet's con worlds. Emphasis is often put on both their tactile presence and potential for mental provocation, and like with any magician performing a trick using trinkets, mini-mythologies are occasionally ascribed to them. They are never just there, rather they exist with gravity and function, and whether it's to advance plot or to reveal deeper truths or ambiguities about a character, their presence may dominate in any given scene. And the hands handling an object at any given time are often just as important as the object itself. We know everything we need to know about Campbell Scott's character in The Spanish Prisoner from the way he manages the multiple books of importance that pass through his possession, just as we also feel the dark liberation of Lindsay Crouse's psychiatrist merely from the way she fondles a gold lighter. Keep your eyes on the hands and objects in a Mamet film. They do the real talking. 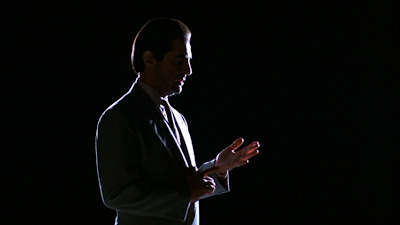 Posted by Drew McIntosh at 3:45 AM

Excellent observation and you're correct. Also, if memory serves, Mamet also directed a Broadway show that Ricky Jay did all about magic and cons. So many of Mamet's films are about deception and how what we perceive on the surface isn't always what it actually is. THE SPANISH PRISONER and HOUSE OF GAMES do this particular well and are probably my fave films of his.

Thanks J.D.! The Broadway show you are referring to is Ricky Jay and his 52 Assistants, and it is pretty awesome, a display of both Jay's knowledge of the rich history of the illusion and his phenomenal slight of hand talents, and it's definitely in line with the aesthetic Mamet takes towards these films.

His movies are definitely about, as you've put, "deception and how what we perceive on the surface isn't always what it actually is", and the thing that draws me into Mamet is how interested he is in the surface, much moreso, I think, than he is in the actuality of the real world of these films. He almost seems to savor these artificial realms built within the con, where every action is amped up and every object has a palpable, tactile presence. Everything always feels (correctly so) deflated when all the cards are laid on the tables in his films.

Agreed! I think that the fact that Mamet spends so much time building up the surface details - the con if you will - certainly illustrates just how much he is into the illusion of something. Even in a film like HOMICIDE which starts off as one thing and ends up, by the film's conclusion, being about something else.

Definitely J.D., deception and illusion are themes that manage to wind their way through much of Mamet's other work, even the stuff not overtly about con artists. Homicide, as you've brought up (probably my favorite Mamet behind House and Prisoner), but also Oleanna and State and Main are all stories that play with uncertain reality and are about, among other things, self-deception. And of course you have Wag the Dog, one of the great American films ever made about illusion.

Ah, yes, WAG THE DOG. Love that one. Hell, even SPARTAN deals in deception (the Government... hello!) and, of course, HEIST. So many great films of his and it is interesting to see how this theme permeates so many of his works - both directorial efforts and screenwriting gigs. Hell, now that I think about it, RONIN deals a lot in deception, artifice and illusion.

Man, I'd completely forgotten that he wrote Ronin. Absolutely.