(This post is a contribution to For the Love of Film (Noir): The Film Preservation Blogathon, which is being hosted by Marilyn Ferdinand of Ferdy on Films and the Self-Styled Siren. You can go here to read more about the Film Noir Foundation and its efforts to preserve important films for future generations, and you can go here to make a donation.) 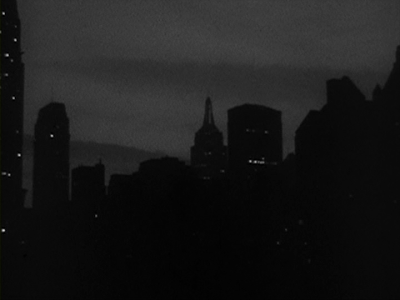 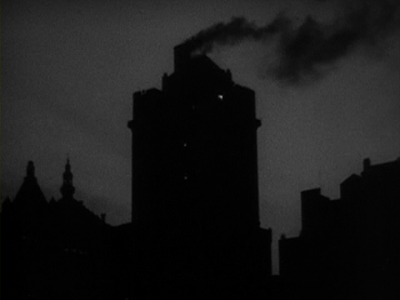 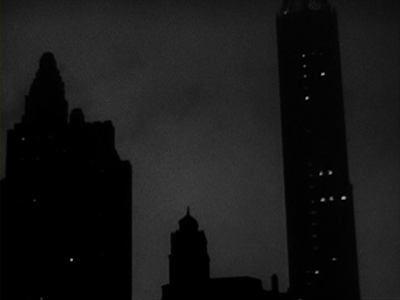 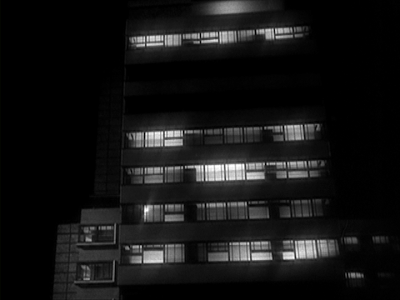 The first image is a cluster of New York buildings standing in front of the night, cloaked in shadow, with Victor Young's moody, haunting jazz score in the air. The camera pans up and over the constructions as they become taller, darker, more ominous. Black smoke billows desperately from the chimney of one. The camera finally settles on a specific building, this one well lit, and we sense correctly that it will be the hub of most if not all of the activity that is to follow. It's a brilliant opening, all at once conveying the existential loneliness of the night-time city and the many seedy stories it surely contains, eventually halting at the entry point for the very story it intends to tell us. The building is Janoth Publications. The movie is The Big Clock. And off the top of my head, I can't think of a more sublimely noirish opening scene.

The camera pushes in through a window of this building, a towering publishing empire named after its founder Earl Janoth (Charles Laughton), where we catch up with a man named George Stroud (Ray Milland), sneaking around in the darkness and evading night watchmen as he maneuvers his way towards the company's signature giant clock, which sits in the lobby, synchronized to tell time from all over the world. And from here he will recount the events that led up to his current predicament, one which has him cowering in fear of being shot on sight in the very building he works for.

George, we find out, was editor for the popular Janoth publication Crimeways, where his talents for utilizing throwaway facts from the street help him build up profiles that allow he and his detectives to sweep up criminals who for one reason or another have evaded the police. It's a job which unfortunately brings very little family time, and under the domineering thumb of his tyrannical boss, George has been forced to flake out on his wife and son time and again, not even having as much as a honeymoon to show for his year-long marriage. One day George, fed up with the lack of personal time he is afforded, stands his ground and as a result is fired. He soon finds himself at a bar getting blotto with one of Janoth's mistresses, Pauline (Rita Johnson), where seeds of a blackmail plan against the wealthy mogul are planted. George eventually passes out at Pauline's place (no infidelity is implied), before being roused from sleep and forced to leave quickly. Janoth arrives, and is able only to make out the vague shadow of a man leaving his girlfriend's place, but that's more than enough to create a heated argument between the couple that ends with Janoth bashing Pauline over the head, killing her. The plan is to pin the murder on the shadowy figure Janoth saw leaving that night, and so he re-hires George to help Crimeways catch this mysterious "murderer". Thus, George finds himself in the unfortunate position of conducting a manhunt against himself, and what develops from there on is a rousing psychological cat and mouse game between he and Janoth, who each have everything to lose and little time to spare. 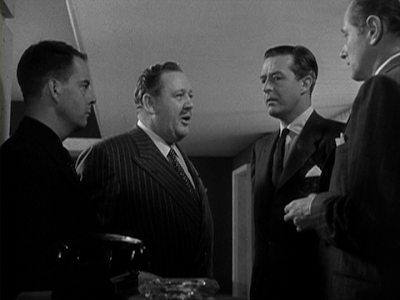 The screenplay by Jonathan Latimer (adapted from a Kenneth Fearing novel, which was also basis for the 1987 Kevin Costner thriller No Way Out) is lean and nasty and darkly humorous, with typically bleak twists and turns, as well as instances of - as Detour's Al Roberts would say - fate sticking out a foot to trip its characters up. The cinematography from legendary John F. Seitz (whose massively impressive body of work includes noir classics Sunset Blvd. and Double Indemnity) is consistently crisp and stylish, his nimble and patient camerawork an excellent meld with Farrow's proclivites for capturing the simple and routine rhythms of daily life in a large publishing company with as much interest as he does the naked existential fear exhibited from his characters. In fact, as suspenseful as the plight of the George Stroud character becomes, for me the most intriguing aspect of The Big Clock is the visual flair given to the large Janoth Publishing building. It is a business atmosphere that quite literally revolves around the precision of time in the form of the titular universal clock, and that same neat precision manifests itself in the characters trim pinstripe attires, as well as the modern architectural designs of the building, where seemingly every room, office, lobby and elevator displays clean rectilinear motifs in the form of patterned walls, furniture and drapes, some of which frequently cast shadows that give off the appearance of prison bars, an analogy that becomes particularly salient once George, having been identified as the murderer and unable to escape, literally becomes a prisoner trapped inside the building. The sleek, meticulous visual world of Janoth Publications and its inhabitants is continuously contrasted against the messier, more humanized outside world, one dominated by smoke, booze, emotional shadows, and the physical and mental clutter of domesticity. 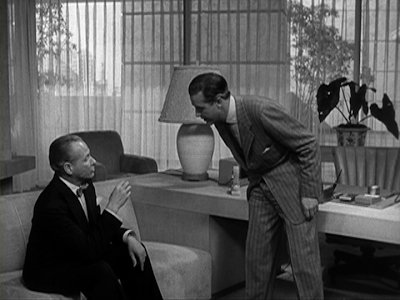 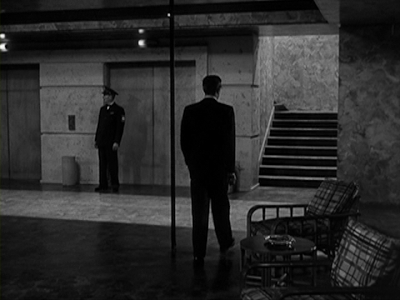 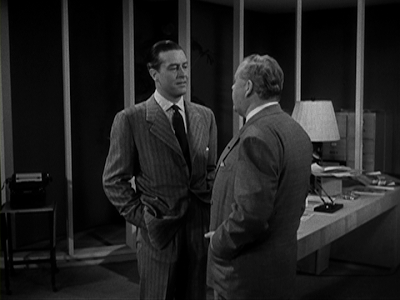 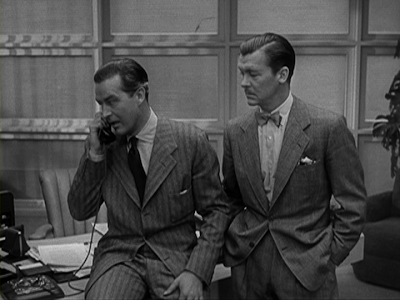 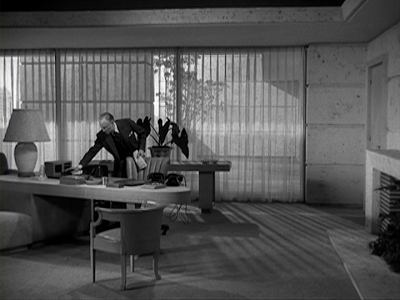 Milland is fantastic in his role as the suffocating protagonist, trapped by the truth, whose intelligence and charm can only get him so far before a whole world of witnesses and various incriminations begins to twist in on him. And the wonderful Charles Laughton is never less than riveting as the slimy and eccentric business tyrant, whose fate is to become literally swallowed into the dark, empty stomach of his empire.

There are those out there who discount the notion of The Big Clock as a true noir because of its lack of femme fatale, its comedic elements and the tidy ending. It's true that there's no incendiary femme fatale present in the movie, but couldn't one easily argue that Laughton's character - duplicitous and destructive, with implied sexual hangups - qualifies at the very least as a twisted version of an homme fatale? And if there is indeed a lack of any fatale-type character, isn't it in service of focalizing with exceptional intensity on one of the most crucial noir character types of all: the innocent male victim, framed for a crime uncommitted, whose life whirlwinds so quickly out of control? And yes, the prevalence of dark comedy present is uncharacteristic of the genre, but it's fluidly integrated into the story and never undermines the tensions of the drama, nor does it ever come across as gratuitous. And as far as the ending goes, and to the extent that it can be called "tidy" or "happy", I would ask one to keep in mind the domestic issues of the characters remaining, and how far they actually are from being solved, as well as this Orson Welles quote: "If you want a happy ending, that depends, of course, on where you stop your story". The Big Clock remains a unique and impressively crafted entry in the noir canon, one that explores in its own distinctive ways many of the techniques, themes and preoccupations that make up the genre so many film lovers can't get enough of. 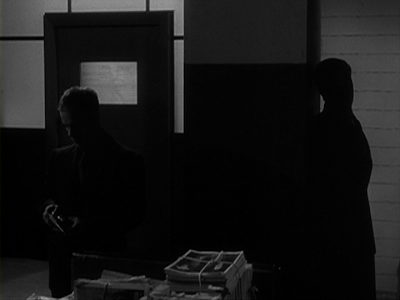 Posted by Drew McIntosh at 6:00 AM

Thanks for reminding me of a film I've enjoyed--and repositioning it as noir, which wasn't something I had thought of.

Thank you very much for the comment, Tinky. I certainly do think of this one as noir. A unique one to be sure, but noir nonetheless.

Thanks for reminding me too...in this case, that this has been in my netflix queue forever. Was wondering about the dvd itself that you watched--a good-quality "print" (or whatever they call the digital versions of these things)? Is that where your still photos come from? Don't know how many dvd editions there are of this...did you get this one from netflix, or do you own it? I guess I'm hoping that the one they send out would look as good on screen as the shots you have here.

Thanks a lot, Tony. The DVD that I watched and own, the same one that the screencaps are from, was released under the Universal Noir Collection line. I believe it is the only Region 1 DVD release the movie has gotten. The transfer is just fine. I'm not a Netflix guy, but I imagine that this would have to be the copy they would send you.

I'm pretty convinced that Woody Allen was very much inspired by the opening shot of this movie for his famous opening to Manhattan.

The black and white / the sky scrappers but the biggest clue is the music. Its not that much a leap to the Gershwin Woody used. Awesome both!