I will admit that I've been out of the blogger loop for a couple of weeks now, having been caught up in the kind of random endeavors and commitments that real life is known to throw at you from time to time. I've been doubling back and catching up on my blog perusal the last couple of days however, and have enjoyed an exciting meme that's been floating around. It seems the meme was started by MovieMan0283 from The Dancing Image, which was itself inspired by Stephen's Gallery of Images at his site Checking On My Sausages. The meme's rules are as follows:

1. Pick as many pictures as you want - but make them screen-captures. These need to be moments that speak to you that perhaps haven't been represented as stills before.

3. You MUST link to Stephen's original gallery and the gallery at The Dancing Image.

This meme has put to good use the sharp eyes and creative edge that characterize so many excellent bloggers, and while making the rounds of my favorite sites, I noticed that, lo and behold, Hans at the wonderful Quiet Cool has tagged me to participate. I am always down for some screencap fun, and it was a treat to rack my brain for a spell and see what (if any) worthwhile contribution I could make to this chain.

While I admit that I'm a dog kinda guy, I've nevertheless always found a great mystery and beauty to cats. Their distinct physical features and piercing alertness have made them a ripe subject for cinematic expression of all sorts, even from the earliest days of the medium. Here I've presented six examples that depict these enigmatic creatures in separate, unique visions: as an exaggeratedly sinister and imminent threat from Stan Brakhage; as an abstract digitalization from Chris Marker; as a symbol of intoxicating, predatory romance from Apichatpong Weerasethakul; as a feral, threatened prisoner from Jacques Torneur; as a thoughtful, passive observer from Dusan Makavejev; and finally as an ominous, slinky shadow of impending doom from Edgar G. Ulmer. 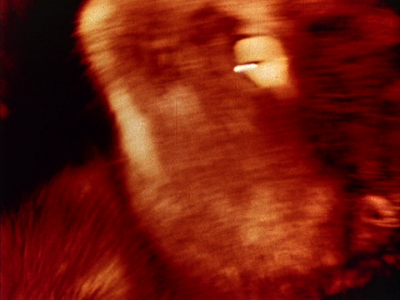 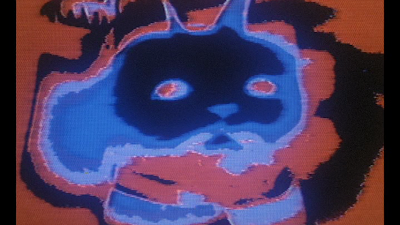 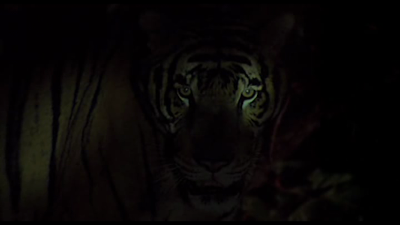 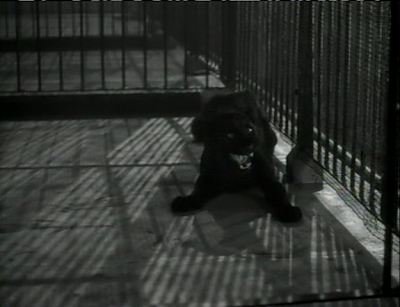 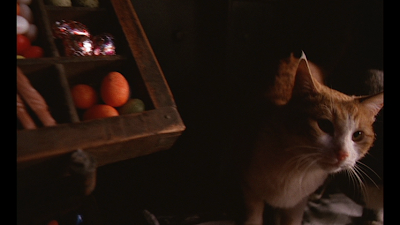 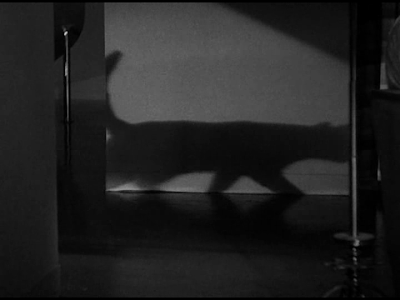 The following five are now tagged:

Carson @ Are the Hills Going to March Off?

Andrew @ The Kinodrome
Posted by Drew McIntosh at 12:05 AM

Where is the Chris Marker image from? Chats Perches?

Fascinating choice of theme. Another blogger, I can't remember who now, used a shot of a cat from Alien.

If you want to have a look I've posted my own response to this meme here:

Thanks, Stephen. The Marker image is from Sans Soleil.

And I have seen your post! It was in fact one of the first I ran across as I was browsing around and began noticing this meme. Yours is likewise a fascinating theme, and what an excellent job culling your images from all corners of the cinematic landscape - from Kieslowski to G. Lucas, from the Dardennes to Singer! Love it.

Awesome idea, and great picks - one thing I love about how this meme has worked out is that within a common theme, the types of films are wildly diverse.

I showed the picture to my own cat, but he did not seem very impressed and mostly wanted to go back to sleep.

Thanks for the comment MovieMan! And thanks for starting all of this off. I agree that the diversity and imagination on display within these memes has been quite impressive, and a ton of fun to keep up with.

Thanks very much Drew.

I've only seen bits and pieces of SANS SOLEIL.

I have been following all of this wonderful venture, at Joel (Movie Man's) place, at Stephen's and a few others, Drew, and your own round-up is terrific as well, but I have still not mastered the technology to put my own five caps together! Ha! I bet it's much easier than I think!

And I wouldn't be too concerned about the blgging absence Drew. You do what you can do when you can manage it. As it is your work has really been fantastic on all counts.

As always, thanks for the kind words, Sam!

Sam, if I may impart to you the very simple method of screencapping that I learned:

I use VLC media player, a very common, simple, safe media player, and play a DVD through it, and pause it on the image you would like to cap. Then at the top of the player, under the 'Video' dropdown option, there is an option called 'Snapshot'. Hit that, and it takes a cap of the image you want and sends it directly to your My Pictures folder.

Yay! A cat collection. I, myself, included at least a couple of cats on my entries for filmicability. Of course, one is only a cat head (and a very funny one at that), but a cat it is. I'm the one who used Jonesy from ALIEN, by the way. Anyway, great stuff!