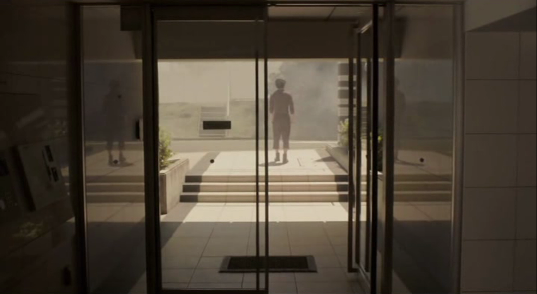 I liked Real a good bit, though it is a departure for Kurosawa in significant ways that have fought off a few qualities I value in his art - namely, it seems that working from source material has flattened him narratively and thematically (gone are those idiosyncratic airs of anomalous tone and plot construction; here the mysteries of thought and behavior are approached as mere puzzles to be unlocked instead of regarded as symptoms) and visually it is almost too good looking, with the rough-hewn edges that have defined so many of his previous visual conceptions almost entirely smoothed over, with sleek architecture and rich foliage sitting in for dilapidation (the one decaying location portrayed is explicitly lamented for and, thus, benign).

Still, Kurosawa, one of the great "protractor-and-metronome" directors (as Ray Durgnat once referred to Lang and Murnau) is able to flex his mastery of rhythm and the ability to conjure unease, and what is most interesting about Real is that this takes place within what is essentially the director's crack at the 'virtual sandbox' subgenre, here taking the idea of intrusion into another's mind and, through its depiction of space, agency and challenge, renders something analogous to the open-air video game experience. Kurosawa is of course no member of any video game generation, and so what we get is not, obviously, the kind of breakneck thing that, say, Neveldine/Taylor or the Harold and Kumar movies (the latter being more unconscious experiments in sandbox realization) offer up, but instead something more composed and curious/suspicious, an "old man's" video game movie, like Cronenberg's eXistenZ (eternally underrated). What these two movies have in common (and some of Phil Solomon's experimental work deals with this also) is an attention to and patience with the vacant details of their environments, a mise-en-scene that forges a dialectic between the attractive freedoms and the inherent artificiality and loneliness of these experiences. Real may lose its footing a bit in a last act that would maybe seem more at home in a Bong Joon-ho picture, but there is a strong feel of mournful investigation here that's hangs in my memory above most of the weaknesses.

Your site is looking wonderful and i love your stuffed content. Thanks for sharing.