It's long past time that I got a new post up here, so here are a few short reviews, followed by a link to my new Tumblr page, which mostly consists at this point of movie/tv stills that have struck me in some way.

Chandler (Paul Magwood, 1971) - An intended star vehicle for Warren Oates after his breakout role in Monte Hellman's seminal Two Lane Blacktop, Chandler stars the legendary character actor as the titular former gumshoe (yes, named after Raymond) who as the movie opens has quit his menial security guard job to jump back into the PI saddle, only to immediately become entangled in an increasingly harebrained plot involving the protection of a mysterious woman (Leslie Caron) with ties to dangerous racketeers. The picture was heavily muddled with by MGM executives in post-production (the most notable change likely being the absence of an intended throwback noir soundtrack in favor of a very rote contemporary thriller score), which can account for much of the awkward editing and unintelligible plotting, but that aside there's still nothing here to suggest that the movie even in its ideal form was destined to be anything other than a dry run for Altman's vastly superior The Long Goodbye, which would come a couple of years later and operate in many of the same genre margins. Yet there are still charms to be found in Chandler, most of which can be charted back to Oates' wonderfully salty performance, brimming with a kind of pathos and weary dignity and habit of turning blinks and half-smirks into a peculiar kind of poetry that only reinforce the notion of the actor being perhaps the most singularly captivating American screen-presence of the seventies. The key moment in the entire film comes when Chandler and the Caron character, on the lam, break down on a pastoral stretch of road - a setting not too dissimilar from one Oates would picnic on with Isela Vega in Peckinpah's Bring Me the Head of Alfredo Garcia three years later. Chandler - a self-professed "urban lowlife" - observes his surroundings quietly, and traipses about like a dinosaur in his domain before pronouncing "This isn't really my mode of living". But the inclination is to not believe him, as it's by far the most comfortable he appears in all 87 minutes, a function of the natural beauty surrounding him. The suggestion is that of a character mired in the illusion of instinct and an uneasy sense of self, who actually can see the forest for the trees, all too well in fact, and seems on the verge of something epiphanic before the screenplay sucks him back into silliness. It's a wonderful scene, probably the best in the movie, and an indication that there were at least some real ideas brewing around at some point in the process. There is also some striking use of the 2.35 frame, most notably in an early sequence involving Chandler tailing Caron through a midday L.A. cityscape, as well as in a surprisingly thrilling car chase along the beautiful Monterey coast. The movie was a commercial and critical bomb, and so ashamed of the final product supposedly was director Paul Magwood that he notoriously took out an ad in the Hollywood Reporter that apologized to all who paid to see Chandler. It was the first and last feature film he would ever direct. 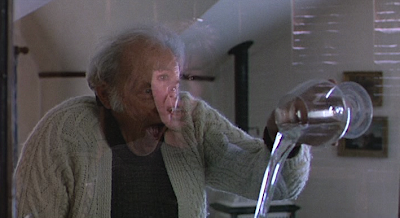 Dead of Winter (Arthur Penn, 1987) - The story goes that as a personal favor to a friend, Arthur Penn took over directorial duties mid-shoot on Dead of Winter, an occasionally clever but more often senseless thriller that tasks Mary Steenburgen with three separate roles: the hapless, naive aspiring actress who finds herself cast last minute in a shady independent production in wintry upstate New York after the former leading lady supposedly had a nervous breakdown, and also as the mysterious pair of twin sisters whose torrid relationship forms the backbone of the blackmail plot that lies behind the phony film production. The vast majority of action unfolds in the snug mansion of the "director" (Jan Rubes, in the film's only tolerable performance), and out of this I continuously thought of three different movies while watching Dead of Winter: the first two being both Mankiewicz's 1972 Sleuth and Branuagh's 2007 pseudo-remake; the former because of a certain claustrophobic sportsman-esque fervor, the latter due to of an almost obsessive preoccupation with decor. The third movie is Jacques Tourneur's forgotten masterpiece Experiment Perilous, not only in terms of the broad strokes of the plot (both movies deal with the copping of a lower-class female by a bourgeois male intent on using house arrest and psychological manipulation to a sinister end), but also because of Rubes' wheelchair-bound low key villainous performance, with dialogue spoken softly amidst unusually cramped mansion interiors; it's a performance that could have been ripped right from some unknown Tourneur chiller. Unfortunately those comparisons to three (far) greater films is I believe more a testament to the extent to which my mind wandered while viewing Dead of Winter than it is anything to do with its actual merits as cinema. The writing is often cringe-inducingly awful and almost always bordering on full-blown camp, and the obscurities played with the nature of the central mystery - lasting more or less the entire running time - drop off into tedium quickly. And then there's Mary Steenburgen, who forgoes the route of subtlety and decides to pitch each of her performances at one of various extremes, ensuring that the viewer at any given moment is well aware within a nanosecond which character she is inhabiting, an effect which also at times rather clumsily undermines intended suspense. Penn's impressive direction and eye for striking economical compositions is very much present however, and manages to salvage an admirable amount of movie, most notably in the climax which takes place in a secret upstairs room and sees awesome use of light, shadow and reflection. By far the most pleasurable aspect of the film is the way in which Penn methodically parses out the deceptively sneaky mansion's architectural secrets bit by bit, subtly building atmosphere and surreality as the viewer's spatial orientation is subverted and expanded. As such, Dead of Winter stands as an intriguing study on how architecture and decor can effectively inform the thriller genre, while providing very few actual thrills itself. It can clearly be considered only as a minor work, but still bears enough of Penn's stamp and strengths to warrant viewing from anyone exploring the later years of the great director. 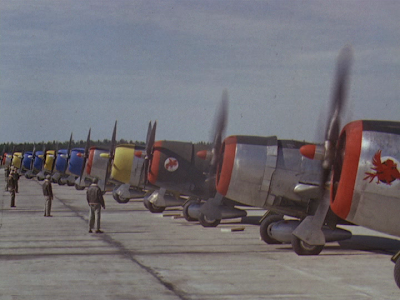 Fighter Squadron (Raoul Walsh, 1948) - The material for Fighter Squadron - a technicolor tribute to the American Air Forces operating in wartime Europe of the early 40's - is not very good, its rah-rah patriotism often sticking its foot out to trip up what could have otherwise been an intriguing character study on the type of man who lives to bide his time, waiting with a well of hidden emotion for his next trip into the cockpit. The plot involves a particularly distinguished air squad - one that proudly boasts the most kills and fewest casualties - and its top ace hotshot pilot (Edmond O'Brien), a reckless malcontent who soon finds himself in the unlikely position of commanding the unit. As simply a war actioner it is quite serviceable, though the real interest comes from Walsh's impressive arranging and handling of the visuals. On the ground, everything is drab and slightly rustic, the uniforms and living quarters and offices all painted in the same monotonous earthy browns and greens. The comic subplots move around in circles with nobody really going anywhere, and everything adds up to the picture of stasis. The squad is in need only of men who live to fly, and so when the time comes for action, the film turns into a ballet of movement and ritual. The single most glorious shot of Fighter Squadron, one worthy of Ford, is the alignment of fighter jets on the airfield, great big mythic machines of war, each one painted with a ring of primary color around its nose. One by one the propellers begin to whir, and off they go into battle. The combat scenes are a fascinating mixture of real war footage and stuff shot by Walsh; the real footage is quite raw and visceral and aggressive, and drives home the destructive nature of war, while the cockpit interiors shot by Walsh display an expressionistic attitude towards space and color, with the windows often taking up as much room in the frame as the pilot, showcasing a swirling canvas of blue sky, white clouds, orange fire and black smoke, peppered with the occasional blood and grey splashes of carnage, giving these moments an unusually felt psychological component. Walsh also, as per usual, has fun experimenting with deep focus and the expressive use of smoke, the former occurring most sharply in the opulent office of General McCready (Henry Hull), probably the most striking and complex interior set I've seen in a Walsh picture to date. For a director who apparently prided himself greatly on the quality of the material he chose, Fighter Squadron stands pretty far from being a crowning achievement, but it nonetheless displays with great verve the kind of spirit and artistry Walsh so often brought to the table.
__________________________________________________________

Feel free to check in on my Tumblr page, which can be found here: mcintosh.tumblr.com

Posted by Drew McIntosh at 3:10 AM

Great to see you back on these threads Drew, and anticipate that all is well! I see nothing has changed as far as perceptive writing at THE BLUE VIAL and concerned, and as ever you have an eye for the forgotten and rarely envisioned. I have never seen "Chandler" but appreciate the perceptive look. I have watched the other two and completely agree that on balance neither is memorable, though it's quite right to assert than no Walsh film is devoid of attributes. I particularly disliked the Penn movie, made near the end of his career. I see the uniting theme here is these captivating extended capsules is that each is problematic.

Thanks, Sam. You are right of course that at the end of the day all three of these were rather middling affairs, though I didn't plan it that way! They just happened to be three movies I felt like writing a little on for one reason or another.

All three have their attributes, though I have to largely have to agree with your feelings on the Penn, as it's easily the weakest from him I've seen and does stick out like something of a sore thumb in what is otherwise a very fine career. At least he would go on to give us one more very interesting movie.